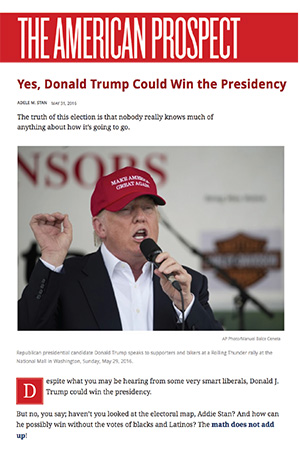 As both a writer and an analyst, Adele M. Stan is widely respected and admired by those involved in politics and policy, yet her work has yet to receive the kind of recognition it deserves. Her prose is by turns elegant and pugilistic, and often laced with rueful humor. If progressives and liberals want to fully understand how an anti-labor, misogynist billionaire who uses hateful, racist language landed in the White House, then Stan’s columns are necessary reading.

If readers found her columns alarmist, Addie Stan reminded people about the importance of being a realist when she pointed out that Hillary Clinton could lose the election, even though the polls were projecting a favorable outcome for her. “A realist is a person who knows that shit happens,” she memorably wrote. “And we’re wading through a river of it now.”

Over the course of 2016, Stan analyzed the 2016 presidential campaign in her weekly column, and exposed the dynamics driving Donald J. Trump’s divisive run for president. Her extraordinary work deserves recognition for its original, in-depth analysis and for pushing against the tide of conventional wisdom.

Early in the campaign, Stan warned of the forces that would later contribute to Trump’s win. Drawing on her 20 years of experience researching and reporting on right-wing politics in the U.S., Stan explained that Trump’s victory was a result of right-wing infrastructure built over the last 40 years, as well as Trump’s ability to manipulate the press. Stan exposed the institutions and players operating behind the scenes of Trump’s presidential run – his alliance to the Koch network, his support from right-wing evangelical religious leaders, and his ties to billionaire principals of privately-held companies. She wrote about the racism and white nationalism underpinning much of Trump’s support, and fearlessly called out the sexism that damaged Clinton.

Stan’s writing laid out her case clearly and broke down the ways Trump’s unconventional campaign tactics were working for him. She showed how he mainstreamed contempt, how his race baiting and misogyny courted white supremacists, and how his simplistic solutions sounded good to many ears. When people wondered why religious leaders would support Trump, Stan explained that it was the religious right’s Calvinist thinking that drew support from the evangelical community. And she reminded readers back in March 2016 that polls at that time had limited value and “the outcome of a U.S. presidential election is not determined by popular vote.”

Another gem was her column explaining that the private capitalists around Trump and his cabinet are unaccustomed to accountability since they don’t run publicly traded companies. Stan contends this is the darkest of dark money that sends a signal about whose interests the Trump administration is assembled to serve and the lack of transparency that would pervade the White House.

Stan’s prescient 2016 portfolio stands as a chilling testimony to fearless commentary, and signals the changes we need in public life and in journalism to preserve civil liberties and pursue social justice.

Adele M. Stan is a weekly columnist for The American Prospect. A longtime chronicler of the right wing of American politics, Stan has written longform investigative pieces on the religious right, the Koch brothers’ network and other subjects for AlterNet, Mother Jones, The Nation, Salon and Rewire, as well as commentary for The New Republic and the op-ed pages of The New York Times and the Los Angeles Times. A lifelong feminist, Stan began her magazine career at Ms. She is a product of the public education system of New Jersey, with a bachelor’s degree from Ramapo College. She lives in Washington, D.C.