Nancy Updike and Nikole Hannah-Jones win the December Sidney Award for House Rules, This American Life’s gripping history of The Fair Housing Act, landmark civil rights legislation enacted in 1968 intended to reverse decades of racist housing policy and segregation. The program is based on Hannah-Jones’ reporting for ProPublica.

Where you live affects how much money you make, where your children go to school, even how healthy you are likely to be. Forty-five years after the Fair Housing Act became law, housing in the U.S. is still heavily segregated by race.

Circa 1930, the average black resident of a Northeastern city lived in a neighborhood that was 30% black. By the 1960s, the average black Northeasterner lived in a neighborhood that was at least 75% black. This level of segregation didn’t happen by accident. As Updike and Hannah-Jones explain, this demographic crunch was the result of a federal policy of “redlining,” which made homes in black and racially mixed neighborhoods ineligible for federally subsidized mortgages, which in turn drove white homeowners out and into all-white enclaves to safeguard their property values.

House Rules shows how housing discrimination persists today by following undercover inspectors from a housing justice organization as they try to rent apartments in New York City. Even today, inspectors of different races sometimes get drastically different answers when they try to rent the same unit.

“House Rules tells the little-known history of one of the most important pieces of civil rights legislation in U.S. history,” said Sidney judge Lindsay Beyerstein, “The program exposes a legacy of official housing discrimination and documents the ongoing efforts to reverse it.”

Nancy Updike is one of the founding producers of This American Life. Her stories appear in “Sissies,” “Crime Scene,” “24 Hours at the Golden Apple,” and other episodes. Her hour-long Iraq story, “I’m from the Private Sector and I’m Here to Help,” won the Edward R. Murrow Award for best news documentary and the Scripps-Howard National Journalism Award in radio. She was nominated for an Emmy for her story “God’s Close-Up,” from the first season of the TAL TV show.

Nikole Hannah-Jones joined ProPublica in late 2011 and covers civil rights with a focus on segregation and discrimination in housing and schools. Her 2012 coverage of federal failures to enforce the landmark 1968 Fair Housing Act won several awards, including Columbia University’s Tobenkin Award for distinguished coverage of racial or religious discrimination. 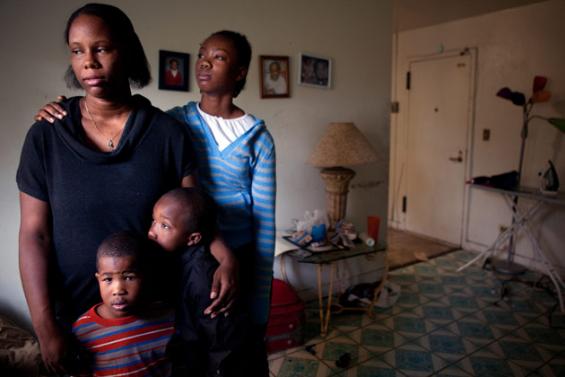 Cherie Michaux, with her daughter Ja'liza Michaux, 12, her nephew Quaheem Moreau, 3, bottom left, and her son Ja'kye Brown, 7, bottom right, in their apartment in Port Chester, N.Y., on Oct. 27.
Melanie Burford for ProPublica

Q: In the first act of the program, you follow housing inspectors who pose as apartment hunters to expose housing discrimination. How did you convince the inspectors to let you record their visits?

A: This American Life did not take part in the tapings, but used recordings made by the Fair Housing Justice Center on its own. The recordings in the show are from lawsuits brought by the FHJC, which employs the people who go out and do the tests. New York has what’s called “one-party consent” when it comes to recording conversations, meaning that as long as one person in the conversation knows that it’s being recorded, then it’s legal.

Q: How did ProPublica and This American Life end up collaborating on this documentary?

A: This American Life and ProPublica have worked on several stories together. Nikole’s great reporting on the Fair Housing Act caught our eye and we approached her and she agreed to work with us.

Q: Nikole Hannah-Jones spent over a year delving into the history of the Fair Housing Act for ProPublica, what inspired her to undertake this ambitious project?

A: Simple beat reporting. Nikole first started looking into fair housing when a press release about some audit tests done to measure levels of housing discrimination in Portland, Ore. landed on her desk. She started asking questions about enforcement and soon learned that the neglect of the Fair Housing Act was a national problem.

Q: What is redlining and how did the federal government create it?

A: Redlining is now used in a general way to refer to various discriminatory lending practices, but it started as actual red lines on maps of neighborhoods, indicating so-called high-risk areas where the federal government would not back home loans. The redlined areas were deemed risky only because they were black or integrated.

Q: By 1967, Lyndon Johnson had gotten two civil rights bills passed, but passing a housing law proved to be an even bigger challenge. Liberal white senators who had supported previous civil rights legislation were reluctant to go along with the housing bill. Why was it such a tough sell?

A: Lyndon Johnson had trouble getting support for a housing bill partly because many northern liberals who had supported previous civil rights bills were against residential integration since it brought civil rights to their own backyards – and the backyards of their voting constituents.

Q: How did George Romney, a former Republican governor of Michigan, become a crusader for housing integration in America?

A: George Romney had been a supporter of civil rights before getting involved in housing issues. When the riots in Detroit happened in 1967, he became convinced that residential segregation was a key part of what he called “the gravest crisis in our nation’s history.” He made desegregation a priority as governor of Michigan and then took his commitment to the federal government as Secretary of the Department of Housing and Urban Development.

Q: The federal government has been using mortgage insurance as a tool to build the middle class since the 1930s. Between 1934 and 1964, an astonishing 98% of federally insured home loans went to whites. Are the effects of this discrimination still apparent today?

A: Absolutely. Perhaps the greatest evidence of this is in the immense wealth gap between black and white Americans. Racialized housing policies helped build the white middle class, allowing many white Americans to grow wealth through homeownership. That wealth has then been passed on generationally. Since homeownership is the largest generator of Americans’ wealth, these policies put black Americans at a distinct disadvantage.

Q: How segregated is the U.S. today, compared to 1967? Would you say that the Fair Housing act has been a success?

A: America as a whole is definitely less segregated than it was in 1967. But in many parts of the country, particularly the industrial cities of the Northeast and Midwest, segregation remains extremely intense and has barely budged over the decades. What’s true today as it was in 1967 is that black Americans remain the most racially isolated group of people in the country. Also, as the Latino population has grown through the decades, their segregation has also increased to rates far higher than before the Fair Housing Act passed. As to whether the Fair Housing Act has been a success, the summary of Nikole’s 18-month investigation is that it’s largely been a failure because the government has refused to aggressively enforce it. Segregation is still quite high and housing discrimination, from individual landlords to lenders, is still rampant.

Q: What still needs to be done to achieve housing equality in the United States?

A: There’s really no way to answer that question in just a few words. But an aggressive federal fair housing testing and enforcement program, an increase of inclusionary zoning policies and HUD taking steps to ensure integration in the programs it funds and operates would go a long way.