Anna Merlan of Vice News wins the May Sidney Award for her exposé on the growing power of anti-vaccination activists in state houses across the country. Merlan’s feature sheds light on nearly identical anti-vaccine bills and resolutions being introduced in Wyoming, Kansas, Missouri, Minnesota, and South Carolina.

These bills, which are full of misinformation and conspiratorial insinuations, turn out to be the work of a fringe advocacy group calling itself “America’s Frontline Doctors” (AFLD). The group is closely allied with the pro-Trump Tea Party Patriots, whose SuperPAC has raised millions for Republicans. In July, Trump shared video of an AFLD press conference that was stricken from major social media platforms for spreading dangerous misinformation. The head of AFLD, Dr. Simone Gold, was arrested for her role in the January 6 insurgency at the Capitol.

Republican politicians and fringe physicians have found common cause during the pandemic because the doctors provide cover for Republicans’ laissez faire approach to the virus. The doctors claim the virus is not a threat, that lockdowns and masks were never necessary. Anti-vaxx ideology also fits well with conservative dogma that frames vaccination as a threat to personal freedom, even though getting the COVID vaccine is optional. Merlan reports that state-level anti-vaxxers are trying to ban hypothetical “vaccine passports.” At the federal level Rep. Marjorie Taylor Greene has likened vaccine passports to the Biblical “Mark of the Beast.”

So far, none of AFLD’s cookie cutter legislation has become law, but this proliferation of bills offers a window into the messaging that the anti-vaccine movement has adopted around the COVID vaccine.

“This month’s winner shines a light on a disturbing alliance between fringe medicine and fringe politics,” said Sidney judge Lindsay Beyerstein. “Anti-vaxxers are building power at the state level and their influence could endure beyond the pandemic.”

Anna Merlan is a senior reporter at Vice; she mainly writes features that focus on conspiracy theories, the communities that form around them and their societal effects. She is the author of the 2019 book “Republic of Lies: American Conspiracy Theorists and Their Surprising Rise to Power.” She’s previously been a staff writer at Jezebel, the Village Voice and the Dallas Observer. 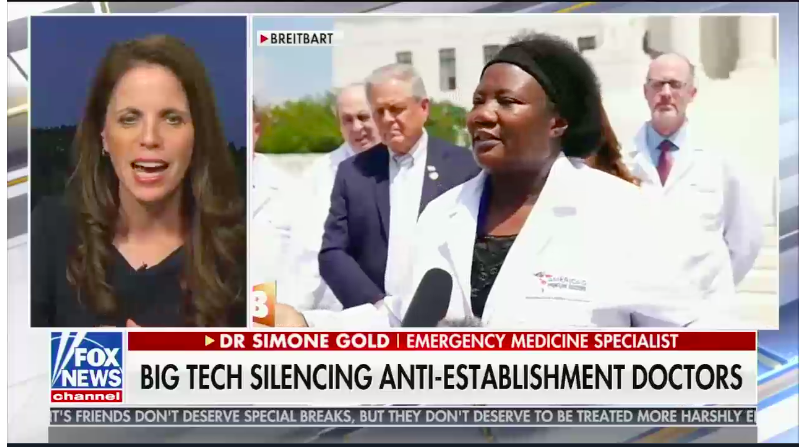 Dr. Simone Gold, founder of the group America's Frontline Doctors, appears on Laura Ingraham's program The Ingraham Angle on Fox News on July 28, 2020; she promoted hydroxychloroquine, a debunked COVID treatment, and claimed she was being censored for her views.
Screenshot via Fox News

Q: How did you find out that legislators in multiple states were introducing cookie-cutter legislation written by an anti-vaccine advocacy group calling itself “America’s Frontline Doctors”?

A: I’d been looking into the various ways that state-level anti-vaccine groups are promoting coronavirus misinformation, acting on a tip from a source. As I was looking at material shared by these state-level groups, I saw that one of them, in Minnesota, had announced that a “Vaccine Bill of Rights” would soon be introduced, based on model legislation by America’s Frontline Doctors (AFLD). A quick search for that phrase in quotes showed that multiple similar bills had been introduced in statehouses across the country. They were relatively easy to find once I knew what I was looking for, since, as I wrote in the piece, these bills were all introduced with essentially identical language, taken directly from AFLD’s website.

Q: Who are “America’s Frontline Doctors” and how are they connected to the Jan 6 insurgency?

A: America’s Frontline Doctors are a fringe group of physicians and their allies, devoted to sharing debunked treatments and “cures” for coronavirus, while casting doubt on recognized and effective means of slowing the disease’s spread like masks and social distancing. As NBC News has reported, a press conference of them making outrageous claims in front of the U.S. Capitol in July was hosted and heavily promoted by a well-funded right wing group called the Tea Party Patriots, which has been part of the movement against any kind of lockdowns or restrictions meant to stem the pandemic. Simone Gold is AFLD’s founder; she was arrested for being inside the Capitol during the insurgency and is out on bond, awaiting trial. An affidavit from an FBI agent investigating her case includes numerous social media photos of her inside the Capitol; she’s admitted to being there but insists it was a peaceful gathering.

Q: How does AFLD relate to more famous anti-vaxxers like Del Bigtree and Dr. Bob Sears?

A: AFLD, Del Bigtree and Bob Sears are all part of a constellation of activists opposing lockdowns, vaccines and other public health measures on supposedly medical grounds. (Bigtree isn’t a doctor, Sears, a pediatrician, has made baseless vaccine skepticism a central focus of his life’s work, and Gold says on LinkedIn that she is a “concierge physician” serving private clients.) None of them have apparently been anywhere close to the “front lines” of the pandemic, but are disguising political and anti-vaccine opinions as impartial medical ones.

Q: When and how did anti-vaxx become so mainstream in the Republican Party?

A: Anti-vaccine beliefs are actually found just as commonly on the left and the right.  But opposition specifically to COVID vaccines is a much more Republican phenomenon. It seems to be the logical end result of the fact that Republican leaders, including the former president, spent a year downplaying the pandemic and the seriousness of the disease.

Q: Ironically, the tremendous success of the COVID vaccines seems poised to restore normal life. Where do you expect the anti-vaxxers to go from here?

A: Anti-vaccine activists will continue to promote the idea that COVID vaccines (and all vaccines) are dangerous, and increasingly they’re pivoting to claims that these vaccines have hidden, long-term side effects that won’t reveal themselves until some future point years from now. (For instance, they’ve falsely claimed that COVID vaccines will affect people’s fertility, something we’ve known isn’t true since these vaccines were in clinical trials.) Besides continuing to find new ways to fearmonger even as COVID case rates tumble precipitously as vaccine uptake improves, they’re also turning the vaccine debate into a civil liberties argument, claiming it’s unconstitutional to ask people to get vaccinated before resuming community activities. So you’ll likely see a lot of people protesting for their “right” to be unvaccinated and complaining they’re being treated like second class citizens if vaccination is required for some specific activity, like attending a concert or sending older kids back to in-person learning.

Q: How does anti-vaccination ideology fit into the larger pattern of conspiratorial thinking in right-wing politics?

A: Conspiratorial thinking is a feature of normal thinking; all of us are conspiracy theorists to a greater or lesser extent. Medical conspiracy theories are especially common in the United States and have a measurable effect on community health outcomes. Anti-vaccine and anti-lockdown ideologies have served to unite a lot of disparate groups, which is pretty frightening.

Q: What is being done at the local level to oppose the influence of these anti-vaxx groups?

A: There are a lot of community advocates working to increase vaccine trust, like Wisconsin Immunization Neighborhood and Immunize Texas, who work on a family and individual level. A lot of these groups were primarily focused on helping increase vital childhood vaccinations pre-pandemic, and now find themselves confronted by a firehose of well-funded COVID misinformation that they also have to address.