Salon’s Irin Carmon has won the November Sidney Award for “The Next Front in the Abortion Wars: Birth Control.”

Today, November 8th, Mississippians are voting on an initiative to amend the state’s constitution to redefine a fertilized egg as a person. The gubernatorial candidates of both major parties have endorsed the measure. Similar ballot initiatives have been tried in other states, but this is the first time such a measure has a chance of passing.

Proponents of Initiative 26 frame the debate as an abortion issue; the amendment would ban all abortions in Mississippi, without exceptions for rape or incest. However, Carmon’s reporting in Mississippi revealed that the agenda of the “Personhood movement” is even broader.

Carmon is a staff writer at Salon. Previously, she was a staff writer at Gawker Media’s Jezebel.com, and has written for BusinessWeek, Fast Company, Tablet, The Boston Globe,The Jerusalem Post, The Village Voice, the New York Times, and other publications. 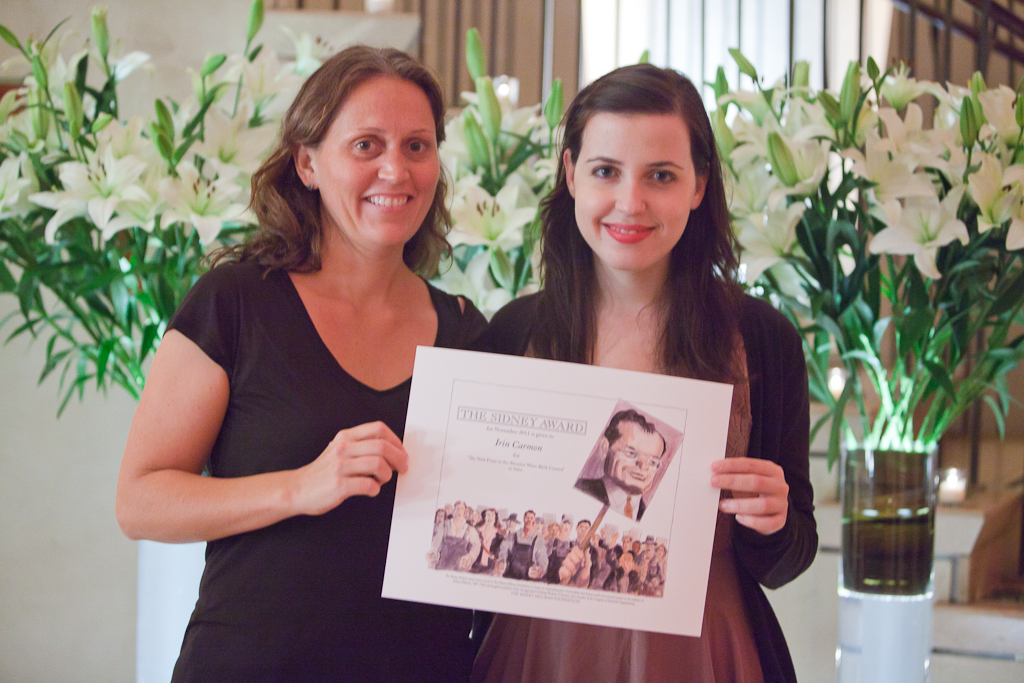 Sidney judge Lindsay Beyerstein spoke with Carmon about her assignment.

What is Initiative 26 and why should we be concerned about it?

Mississippi’s ballot initiative 26 presents the first plausible opportunity for the so-called “Personhood movement” to actually pass a state constitutional amendment giving fertilized eggs full rights as “persons.” It’s not only a bid to overturn Roe v. Wade and ban abortion in all circumstances – it moves the goalposts to potentially banning many safe, common forms of birth control, severely restricting IVF, putting constraints on doctors saving a woman’s life, and criminalizing some pregnant women.

You reported this story from Mississippi. Tell us about your time on assignment.

Since the stars aligned for me to be in Mississippi before the vote, I felt a tremendous pressure to make sure that the resources (time, money) invested were going to translate into material that I couldn’t have gotten over the phone or online. A lot of that, generally speaking, has to do with luck – stumbling upon the evocative scene or interaction. And once the Personhood grassroots tagged me as a “wolf in sheep’s clothing,” direct engagement was more difficult (though I weighed showing up at the backwoods compound of its leader). But in the end, the most important conversations ended up being with the pro-26 doctors who might have been more evasive or hung up on me had I not been sitting across from them trying not to let them off the hook.

Though it’s nearly always worth it to get boots on the ground, the Internet also wound up being an important resource for illuminating the various dynamics, whether it was via the pro-26 Facebook page or transcripts of hearings that had occurred months before my arrival.

Based on your reporting, would you say that the supporters of Initiative 26 are actively hostile towards birth control?

The problem is that what the medical community and you and I call “birth control,” some of them want to call “abortion.” The Personhood movement hasn’t gotten its message straight on this quite yet – partly because it’s easier to yoke together a coalition against abortion, partly because some people are fuzzy on the biology. The fact that lots of people don’t understand how hormonal birth control works (primarily by preventing ovulation) exacerbates this.

Who are the main opponents of the Personhood Amendment? What has been their strategy to oppose it?

The official opposition is led by the ACLU and Planned Parenthood, and has been joined by a few other groups like the NAACP and the Feminist Majority Foundation. But in the time the big groups were fighting the legal battle to get it off the ballot – which they lost – frustrated locals started their own grassroots opposition groups. While an election is particularly galvanizing, it’s possible they’ve laid the groundwork for a new vocally pro-choice contingent for the future.

Was there anything that you wanted to put in your story but didn’t have room for?

Beverly McMillan, the pro-Personhood doctor who believes that “birth control pills cause abortions,” is an example of how the Personhood movement is both new (in that it’s a radical rather than incremental strategy) and old (in that involves the same motives and the same characters.) She also has a sort of Forrest Gump background: She was a medical resident in an infected OB ward pre-Roe who was horrified by how women who had back-alley abortions were treated and wanted them to have more dignity. She called herself a feminist and wound up opening the first abortion clinic in Mississippi. But in the early 80s, she had a religious awakening and eventually became a Catholic and an extreme anti-abortion activist. Her husband, Roy McMillan, was profiled by the New York Times magazine in 1994 as the new face of anti-choice activism – namely, one that endorsed the murder of doctors. He’s still yelling outside the sole remaining clinic in the state every day they see patients. And like his wife, he’s spoken out for Personhood.

Care to make a prediction about how the November 8th vote will go?

My guess is that it’ll probably pass, but failure isn’t out of the question. Mississippi Gov. Haley Barbour casting doubts on it was a boon for the opposition – they instantly made it into a robocall – but then he voted for it by absentee ballot anyway. If that winds up being the arc of the average Mississippian, the state’s about to be mired in more litigation costs for a long time.