The Post & Courier wins the July Sidney Award for its coverage of the Emanuel AME church shooting.

The Post and Courier distinguished itself with breaking news coverage of the shooting itself, and the hunt for the killer.

Above all, the Post and Courier deserves credit for establishing the shooter’s connection to white supremacism. The paper’s meticulous coverage established that the shooter had ties to organized hate groups.

In the wake of the shooting, the Post and Courier took an early and forceful editorial stance against the Confederate flag in the state capitol. On Monday, the South Carolina Senate voted overwhelmingly to take down the flag.

The paper’s frank discussions of race and racism have sparked controversy. The Post & Courier website was shut down temporarily by an apparent DDoS attack, two days after the shooting.

“The Post and Courier’s coverage has been a national resource at a time of tragedy,” said Sidney judge Lindsay Beyerstein.

The Post and Courier is the South’s oldest daily newspaper. Doug Pardue, Glenn Smith, Jennifer Berry Hawes, and Natalie Caula Hauff won a Sidney Award in September 2014 for a P&C series on South Carolina’s domestic homicide crisis. The series went on to win a Pulitzer Prize. 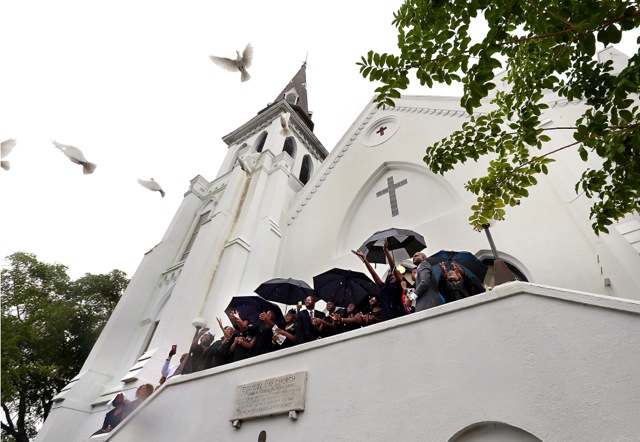 Q: How did you learn about the shooting at the Emanuel AME?

A: Projects Editor, Glenn Smith got a call from a colleague as he was enjoying a night with friends. The caller had heard the police news over the scanner and told Glenn that people had been shot at Emanuel AME Church just a couple of blocks from Glenn’s downtown Charleston home. In flip-flops and shorts, with pen, notepad and cell phone in hand, Glenn trotted over to Calhoun Street where he encountered legions of police and EMS workers streaming around Emanuel AME, among the oldest Black churches in the South. Criminal Justice Reporter Melissa Boughton arrived at the scene about the same time as Glenn.

Executive Editor Mitch Pugh remembers getting a frantic phone call from Glenn as he was running to the scene.  Glenn is usually very calm so the urgency in his voice alarmed Mitch immediately. “I think we all knew this was something horrific and incredibly significant early on.”

And so began three weeks of unrelenting coverage of the killings: what happened inside the church during the hour the shooter was there, the arrest of the suspected killer, the discovery of a racist online manifesto attributed to the 21-year-old charged with the killings, the nine funerals, the call by Gov. Nikki Haley to bring down the Confederate flag from the Statehouse grounds, a sudden outbreak of fires at black churches in South Carolina and across the South; and this week, as I write this, the state Legislature taking action to respond to the governor’s request by passing legislation to remove the Confederate flag from where it’s been for a half century.  And the coverage continues…

Q: How did you learn about Roof’s ties to organized white supremacism?

A: I was at home Saturday morning when I got a call from Metro Editor Matt Sartwell telling me that an online manifesto purportedly by Dylann Roof, the man charged with the nine church killings, had been discovered. The manifesto set out how he supposedly became a white supremacist and his possible motivation for the killings. I rushed into the office to help Business Reporter David Wren, who was pulling Saturday duty, report the story.

Q: Out of the dozens of stories that the P&C has published on the shooting and its aftermath, which ones have had the most impact?

A: The initial breaking story. We followed a day later with personalized stories about each of the nine victims. The chilling account, “In an hour, a church changes forever,.” by Projects Reporters Doug Pardue and Jennifer Berry Hawes detailing what happened during the hour the killer was inside the church and how he shot the worshippers. The manifesto story. The nine funerals, including President Obama’s powerful eulogy for the Rev. Clementa Pinckney, pastor of Emanuel AME Church. An online polling of lawmakers on their stance about removing the flag, and a four-page memorial wrap over the A-section featuring nine palmetto roses, memorial stories on each victim and a poem by the state’s Poet Laureate.

Q: Tell us about the DDoS attack on the paper’s website. Did anyone claim responsibility for the attack?

The DDoS attack happened on a day when traffic was spiking so it took us about an hour to realize what was happening. We were never able to trace it to an origin but our vendors assure us it was an attack and an attack aimed at our site, not others that they serve. But we quickly put measures into place to mitigate it and haven’t had problems since.

Q: This wasn’t the first time the AME church has been targeted by extremists. Can you tell us more about the history of violence against the church in Charleston?

A: Emanuel AME was founded in 1816, the first AME church in the South. It also was among the first in the South to be independently run by blacks.  One of the church’s founding members was freed slave Denmark Vesey who, by some accounts, used the basement of the church to organize a slave rebellion. The planned rebellion was discovered in 1822 and Vesey was hanged along with 34 other alleged co-plotters. The church’s minister, Morris Brown, fled to Philadelphia and the church was burned to the ground. Members rebuilt it, but in 1834 laws were enacted banning black-run churches. The members met underground until after the Civil War when the church was rebuilt again and named Emanuel, meaning “God is with us.”

Q: The paper has taken a strong editorial stance against the Confederate Flag. How are readers reacting?

A: Editorial Editor Charles Rowe says the response has been mostly favorable, including numerous proposed op-ed pieces and essays about the Confederate flag, history and the shootings. But as far as letters to the editor are concerned, the response pales in comparison to the outraged and sympathetic response to the actual church shootings.

Overall, reader and community feedback about our coverage has been overwhelmingly positive.

Most of the state’s elected leaders have also joined the calls for bringing down the flag and the state Legislature is poised this week to do just that.