Trymaine Lee has won the April Sidney Award for his coverage of the Trayvon Martin shooting. Lee, a senior reporter at the Huffington Post, spearheaded his site’s reporting effort, which helped turn the killing of Martin into a national cause.

On Feb. 26, 2012, 17-year-old Trayvon Martin was shot and killed in Sanford, Florida by George Zimmerman, a 28-year-old self-appointed neighborhood watch captain who claims he shot the unarmed black youth in self-defense.

Lee’s March 8th story drew national attention to the killing which, until then, was only being covered by local Sanford media. As the story garnered ever greater attention, he persuaded his editors to send him on assignment to Florida.

Lee unearthed facts about George Zimmerman’s history of violence. In Florida, he obtained an interview with the youngest witness to the shooting, a 13-year-old black youth who told the reporter, “If I was like two years older, that could have happened to me.”

“Lee’s work on this story demonstrates the power of a single, enterprising journalist to shape the national conversation,” said Sidney judge Lindsay Beyerstein.

Trymaine Lee is a senior reporter at the Huffington Post covering national stories that impact the black community.

As a staff writer at the New Orleans Times-Picayune, Lee was part of a team that won the Pulitzer Prize for Hurricane Katrina coverage. As a reporter for the New York Times, he contributed reporting to the paper’s 2009 Pulitzer Prize-winning coverage of the Eliot Spitzer scandal. 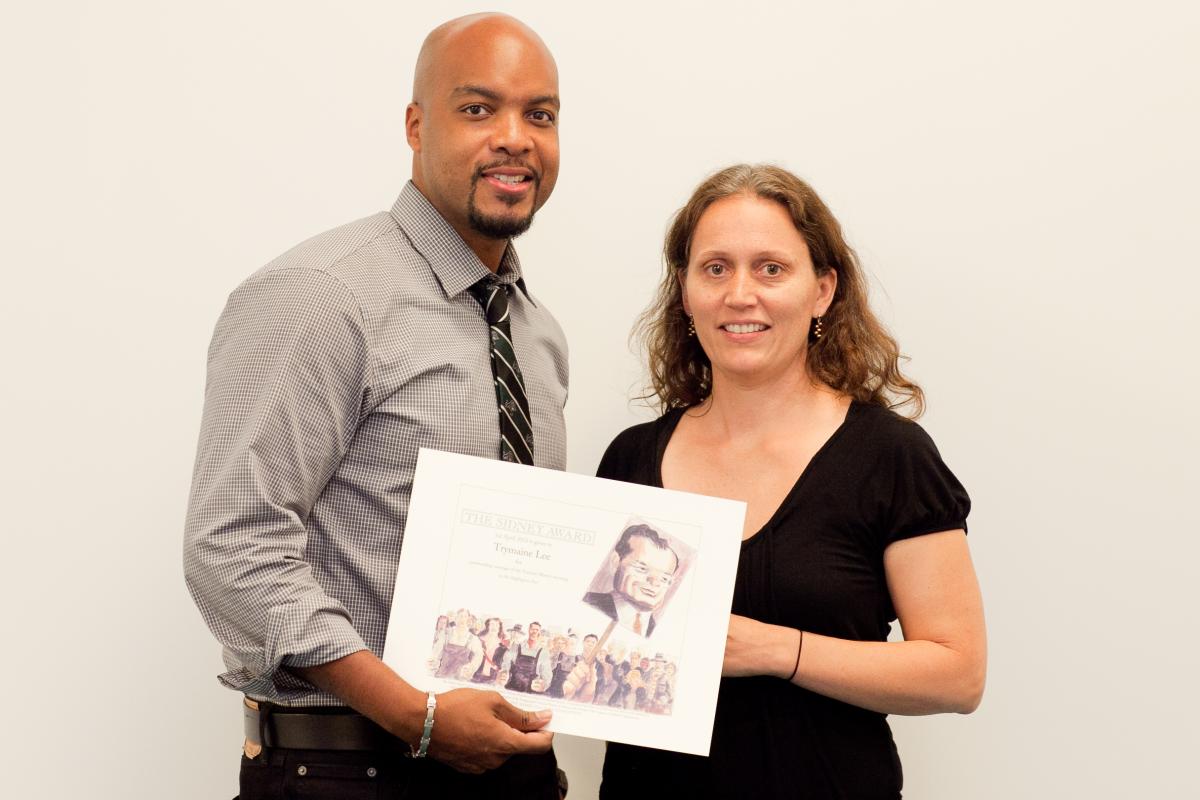 Lindsay Beyerstein spoke with Lee about his piece:

1. How did you first hear about the shooting of Trayvon Martin?

I first heard about the shooting of Trayvon Martin on March 8th from a source down in Florida who gave me the basic elements of the story, the 5 w’s.

2. How did this local story evolve into national news?

What propelled this story from local to national news was the groundswell of support behind Martin’s family, first in Sanford where the shooting occurred, then on the Internet and Twitter. I also think my early coverage definitely helped light the fire. I wrote my first story on March 8th and filed a story nearly every day after– well into late March.

By virtue of the Huffington Post platform, the story was being shared and spread by the thousands. Reader engagement was through the roof. Before we pushed the story, few if any major national news outlets were covering it.

When it went viral the rest of the national media had no choice but to pay attention. Also, the nature of the story itself and how it continued to evolve helped pushed it national. Once the city released the 911 audio recordings taken the night of the shooting, with the sobbing neighbors, the chilling screams heard in the background, the silencing gunshot and George Zimmerman’s report of a “suspicious” black guy, the storyline just resonated that much more.

3. Describe how you came to be the Huffington Post’s lead reporter on the Martin story. Was it an assignment you sought out, or an idea your editors brought to you?

As soon as my source gave me the basic elements of the shooting I knew that it was a story worth telling. I immediately got to work reporting that first story and building sources down in Florida. I approached it in a sort of, better to ask forgiveness than permission, kind of way.

Once the story started to gain traction and my reporting started to flesh out more of what happened that night and details about the people involved, I took the story to my editors and made the case to fly down to Sanford to continue reporting.

4. Your job includes both aggregating and reporting from Sanford, Florida. Recently, you interviewed a 13-year-old witness to the shooting. Was it difficult to convince him to speak on the record?

Interviews with youth can be difficult. This interview wasn’t much different. This young witness was still rattled by what he saw and heard the night of the shooting. But once we sat down and just talked about everything but the shooting for about ten minutes, he felt a bit more comfortable and opened up.

5. Of all the stories you’ve written on this case, which one has generated the greatest reader response?

By far, the story that has generated the most reader response is a story I wrote about the police surveillance video recorded the night of the shooting that shows George Zimmerman, just hours after the shooting, with no apparent bruises, blood on his clothing or anything that would indicate the violent fight for life he claims he was in before shooting Martin. [The video was originally reported by ABC News.] To date, the story has generated more than 40,770 comments, 12,300 shares on Facebook and nearly 43,000 likes on Facebook.

6. What’s the next big procedural step in the Martin case?

The next big step will be whether or not a special prosecutor assigned to the case will charge George Zimmerman with the killing.

7. According to one survey, 73% of Americans think that George Zimmerman should be arrested. Do you think he will ever stand trial?

I really don’t know if Zimmerman will ever stand trial. He hasn’t even been arrested or charged with a crime yet. It really is a difficult and complicated case. I guess we’ll all have to just wait and see. In the meantime, I’ll keep pounding the pavement and working my sources on this story.