Amanda Hess Wins February Sidney Award for “The Next Civil Rights Issue: Why Women Aren’t Welcome on the Internet”

Amanda Hess wins the February Sidney Award for her provocative Pacific Standard essay, “The Next Civil Rights Issue: Why Women Aren’t Welcome on the Internet,” describing the abuse that female journalists disproportionately encounter online and the implications of this phenomenon for women’s equality in the public sphere.

“Happy to say we live in the same state. Im looking you up, and when I find you, im going to rape you and remove your head,” the user @headlessfemalepig tweeted at Hess, “You are going to die and I am the one who is going to kill you. I promise you this.” When she called the police, the responding officer had never even heard of Twitter.

Like many victims, Hess discovered that existing cyberstalking laws provide little meaningful protection for women who are targeted for online abuse. She was able to obtain an order of protection against one particularly tenacious serial cyberstalker, but only after multiple trips to court, and only for one year.

Hess’s experiences are sadly typical for women online. A 2006 study found that simply having a female user name in a chat room dramatically increases the odds of abusive or sexual messages. Fake accounts with female names averaged 100 such messages per day, while accounts with male names received just 3.7.

Amanda Hess is a Slate staff writer and co-founder of Tomorrow magazine. Her work has appeared in WIRED, ESPN: The Magazine, The New York Times, The Los Angeles Times, The Village Voice, and Pacific Standard. 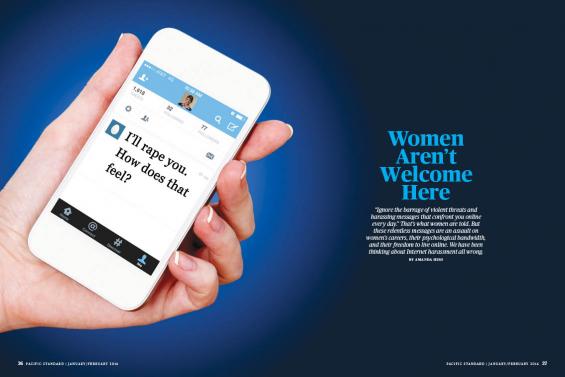 "Women Aren't Welcome Here" was the cover story of the January/February issue of Pacific Standard.

Q. You open your essay with a chilling account of a reader making death threats against you and the police being flummoxed by harassment that originated online. What happened?

I was on vacation with some friends in Palm Springs when a guy calling himself “headlessfemalepig” on Twitter told me that he was going to come to my house, rape me, and cut off my head. When I called the cops, the officer who came to my hotel room asked, “What is Twitter?” I found that simultaneously hilarious, frustrating, and fascinating. The process of reporting the incident to the police pretty quickly turned into the beginning of reporting the story.

Q. It’s not just anecdotal: Women get way more abuse online. Tell us about the statistics.

To my knowledge, nobody has done any great direct research on the people who are stalked, harassed, and threatened online, and the people who are perpetrating those crimes, so I dug for as much research as I could that pointed at the issue sideways. Women are much more likely than men to have received messages while dating online that make them feel “harassed and uncomfortable.” When men seek to protect their privacy online, they’re more likely to say that they’re doing so to avoid detection by advertisers, website owners, and law enforcement, while women are more likely to say they’re hiding from people from their past. Even robot women get more abuse on the internet—researchers from the University of Michigan found that when they released bots with masculine and feminine usernames into chat rooms, the feminine names received an average of 100 sexually explicit or threatening messages a day, while masculine names received 3.7. And all of this is happening in an online community where men still overwhelmingly hold positions of power—like leading tech companies and holding down online commentating gigs—and in a world where we know women are more likely to be the victims of stalking, sexual harassment, and sexual abuse in offline settings. Since writing the story, I’ve heard from some researchers who are interested in studying the issue more directly.

Q. The internet has become the new public square. What implications does online abuse have for women’s inequality in the digital world?

I think a lot of people believe that the internet gives us the opportunity to foster a free exchange of ideas between everyone with an internet connection, regardless of their traditional institutional power. In the recent State of the Union, we heard a lot about an initiative between the FCC and tech companies to bring internet access to more schools and students in order to bring them into the conversation. What we didn’t hear about were the social barriers that persist online even after people are given the literal tools to log on. We don’t know what the world of ideas would look like if women legitimately enjoyed equal access to the internet on a practical level.

Q. You note that online threats are so easy to make, and so rarely acted upon, that some authorities regard them as inherently less serious than other kinds of threats (i.e. those made in person, or over the phone). What does that mean for victims?

It means that the personal effects of the abuse are compounded far beyond the initial threat. Without the support of law enforcement, women are forced to seek out protection services and civil remedies, like restraining orders, ourselves, in an effort to keep harassers at bay. We’re often robbed of the tools to even identify our harassers or to prove that we’ve been the victims of repeated harassment, because we don’t have access to the mechanisms—like subpoenas and court orders—that are necessary to investigate our crimes. We’re less likely to enjoy support from friends or other members of the online community, who also don’t see the crimes as totally “real.” It all adds up to a tax on women’s participation on the internet—we have to spend a lot of time, money, and personal emotional investment in order to deal with real crimes that the government nevertheless fails to recognize.

Q. How does Twitter currently deal with people who use the messaging service to make threats?

Twitter has mechanisms in place that help victims of abuse ignore the people who are stalking and threatening them—it’s easy to click a button to report a user as abusive, and have Twitter’s team shut down their account. It’s even easier to block another user on Twitter, which means that the targeted user won’t have to see the vile tweets that continue to come her way. It’s a lot harder to seek actual legal remedies against those criminals, and in a lot of cases, Twitter’s strategy for deleting vile tweets can interfere with the legal process—it’s a lot harder for me to prove that I’ve been threatened once the evidence is gone. But just because no one can see a threatening tweet anymore doesn’t mean that my life hasn’t been threatened. Meanwhile, the abuser is free to just create a new pseudonym on the service and keep tweeting away.

I’m not sure there’s a clear solution for Twitter or other online companies to undertake to prevent this abuse from happening—and if I had the answer, I’d probably be a tech zillionaire instead of a journalist. What I do know is that the tech industry is hiring some of our best and brightest thinkers to solve what sometimes amount to petty problems—dinner, cabs, and dates on demand—while bigger social problems are still being ignored. I have to think that if these companies made a more concerted effort to hire women in their ranks—and not to dismiss calls for diversity, as Twitter has done—they’d be more likely to understand the wider range of issues that their users need fixed. They’re not the same problems that the overwhelmingly young, white men who run tech companies are experiencing.

Q. Some lawyers are trying to use civil rights law to protect women from cyberstalking. How does that work?

This is an emerging field of inquiry in the legal field that’s being led by women like Danielle Citron at the University of Maryland and Mary Anne Franks at the University of Miami, and it’s centered on extending certain civil protections that are already in place to apply to the venue of the internet or to women as a protected class. We have laws that frame threats of force as abusive if they’re targeted at impeding the livelihood of people on the basis of race or religion, but they currently don’t extend to gender. And we have laws that protect women from sexual harassment in the workplace and in education, but they currently don’t extend to our status on the internet. Citron calls the prospect of amending these civil rights protections a “Sisyphean task”—but she also points out that discrimination against women has historically been ignored and discounted until the law has managed to catch up.