The Sidney Hillman Foundation announced today that Makenzie Huber of the Argus Leader wins the May Sidney Award for her coverage of the COVID-19 epidemic at the Smithfield Foods pork processing plant in Sioux Falls, South Dakota.

The plant saw its first case on March 26 and the outbreak rapidly ballooned into one of the largest outbreaks in the nation with more than 800 workers testing positive. In early April, Huber broke the news that Smithfield was dangling a $500 “responsibility bonus” to workers who went the whole month without missing work, an offer many workers saw as a bribe to work sick.

Angelita Rodriguez says her 64-year-old husband, Augustín, never missed a shift, even after he began to experience symptoms of COVID-19. Augustín, an immigrant from El Salvador, worked at the plant for 20 years. He died in mid-April, after 2 weeks on a ventilator. Rodriguez now feels he was worked to death. “I lost him because of that horrible place,” she told Huber. “Those horrible people and their supervisors, they’re sitting in their homes, and they’re happy with their families.”

“I don’t like the term essential worker,” said John Deranamie, a 50-year-old father of eight, who contracted coronavirus at the Smithfield plant, “Essential worker just means you’re on the death track.”

Workers were ambivalent about going back to work after an emergency shutdown. They needed the work, but they expressed doubts that many of the CDC’s social distancing recommendations were feasible in the cramped facility.

“Huber’s reporting captures the struggles of Smithfield’s workforce, the greed and irresponsibility of Smithfield Foods, and the vacillating of the governor,” said Sidney judge Lindsay Beyerstein. “Her work is also a testament to the enduring importance of local newspapers.”

Makenzie Huber joined the Argus Leader, part of the USA Today Network, in 2017. She covers breaking news and crime in the Sioux Falls, South Dakota area. 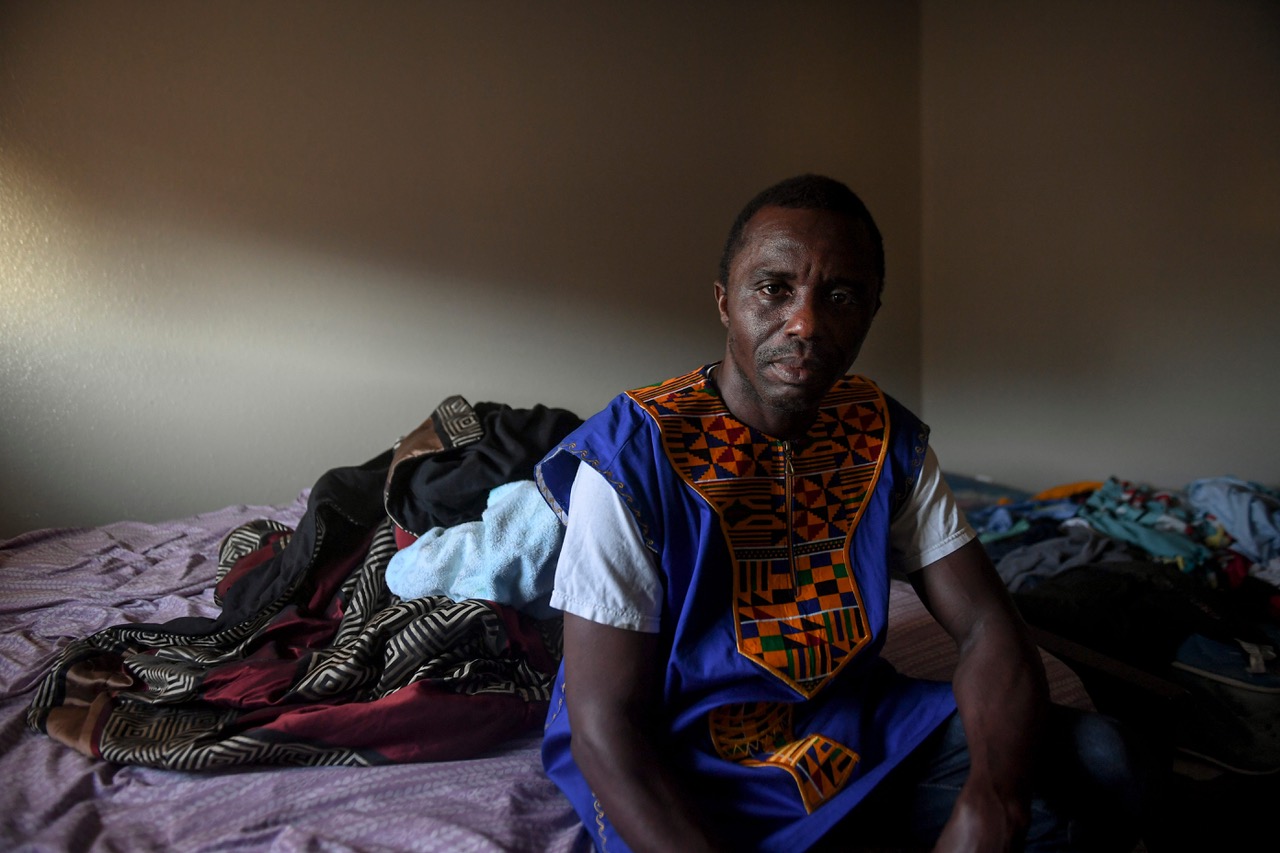 John Deranamie, a Smithfield Foods employee, in the room he self-quarantined in after testing positive for COVID-19. "I was forced to go to work," he said. "Even though I knew it was a dangerous situation at work, I still had to go to work because I have to support my family."
Abigail Dollins / Argus Leader

Q: Was there a moment when it really hit home for you that COVID-19 had reached Sioux Falls?

A: It wasn’t until my coworker, Trevor Mitchell, broke the story on Smithfield’s first case that I realized just how vulnerable Sioux Falls was to the pandemic. South Dakota had reported 46 cases by March 26, but I think several people in our newsroom realized that once it hit the plant it had the potential to explode if it wasn’t treated properly. Smithfield Foods is one of Sioux Falls’ largest employers, and several families are connected to the meat packing plant through one or more workers. Other family members of Smithfield employees worked at other businesses across Sioux Falls — banks, casinos, restaurants, grocery stores — that could potentially spread the virus. I think we were all holding our breath in Sioux Falls, waiting for Smithfield to blow up as it did.

Q: How did you find out that Smithfield was offering $500 “responsibility bonuses” to workers who didn’t miss any shifts during the outbreak?

A: I spoke with more than a dozen workers about the conditions they experienced inside the plant and their concerns surrounding how Smithfield was handling the coronavirus outbreak unfolding inside the facility. Several of them spoke about the $500 “responsibility bonus” as though it was a bribe or incentive for sick workers to come into work. Even though many workers weren’t supportive of the bonus, the company advertised the bonus on its website as part of its COVID-19 marketing response.

Q: The president invoked the Defense Production Act for meatpacking facilities, what impact–if any–has this declaration had on meatpacking workers?

A: The order doesn’t change anything for workers. They were expecting to return to work within a few weeks of the Smithfield Foods plant closing down anyway. They were considered essential workers before the order, and they’re considered essential still. It means that they continue to go to work — worried about conditions inside the plant and interacting with their coworkers — even after changes have been made to follow CDC recommended guidelines.

Q: Describe the impact your reporting on COVID-19 and the meatpacking industry has had so far.

A: I’d like to think that the Argus Leader’s initial coverage of the workers’ concerns helped raise their voices so government leaders and others with more power took notice. After my initial story, South Dakota Gov. Kristi Noem changed her position on the meatpacking plant working through the pandemic and encouraged the plant to close for a period of time. That pressure and shutdown has allowed CDC, OSHA and the USDA to inspect the facility and recommend changes to the building — many of which have been made by Smithfield.

As I continued to talk with workers, I spoke with a widow of the first Smithfield worker to die of COVID-19 and I interviewed John Deranamie, a dedicated employee and father of eight who contracted COVID-19 inside the plant. My hope is that through my work with these people and sharing their stories, people across the country can empathize with them and realize the risks they have to take to not only put food on America’s tables, but their own family’s.

Q: The industry is promising to protect workers, but do you see those promises being fulfilled on the ground?

A: The Sioux Falls plant is only just starting to reopen, so I can’t answer that question with full confidence. But John Deranamie went back to work on Monday and said he’s seen several changes  — Plexiglass barriers along the production line, hand sanitizer stations and processes to restrict overcrowding in parts of the plant. But he’s still planning to use vacation time so he won’t have to work for a month. I think his decision reflects how other workers feel; they’re still worried about their safety. There’s no way of knowing if the changes will protect them from a second outbreak yet.

A: John is doing well. He’s planning to use vacation time to escape the plant as the pandemic continues. He’s spending that time with his family — something he wouldn’t normally have been able to do working 50 to 60 hours a week on the night shift to support them.