The Sidney Hillman Foundation announced today that Andrew Chung, Lawrence Hurley, Andrea Januta, Jackie Botts, and Guillermo Gomez have won the June Sidney Award for Shielded: For Cops Who Kill, Special Supreme Court Protection, a prescient Reuters investigation which includes a groundbreaking data analysis that shows how the Supreme Court has honed the doctrine of qualified immunity to make it almost impossible to sue police officers for excessive force.

Qualified immunity is a legal doctrine that says that police officers can’t be sued for their actions on the job, unless they break a “clearly established” federal law. The doctrine was intended to protect public officials from frivolous lawsuits, but as Justice Sonya Sotomayor observed in 2018, it has become “an absolute shield” for violent cops.

Reuters uncovered three dozen cases where the officers got qualified immunity despite their behavior being deemed unlawful.

Between 2005 and 2007, appellate courts granted qualified immunity to police 44% of the time, that number rose to 57% for the years 2017 through 2019. Traditionally, lower courts had to answer two questions before granting qualified immunity: Did the officer use excessive force? And if so, is there a precedent that precisely mirrors the current circumstances? In 2009, the Supreme Court allowed lower courts to ignore the excessive force question and go right to the precedent question. But when courts decline to address the excessive force question, they then don’t create a new case that could serve as a future precedent.

“The Reuters team shines a light on an outrageous loophole,” said Sidney judge Lindsay Beyerstein. “The Supreme Court forces lower courts to interpret precedents so narrowly that it’s almost impossible to show that they apply to the case at hand. Which means the same offenses can go unchecked time after time.”

In 2018, a judge “reluctantly” granted qualified immunity to a police officer who slammed an unarmed man to the ground for mouthing off. The judge agreed that this was excessive force and he identified a precedent against slamming unarmed citizens to the ground just for yelling. However, given the Supreme Court’s strict standards, the judge was forced to rule that the precedent did not exactly apply to the case at hand because of a few seemingly irrelevant differences, such as the fact that one victim was slammed in his own home while the other was slammed in a Target parking lot. The judge wrote that “a court can almost always manufacture a factual distinction” between a case and a putative precedent.”

Andrew Chung is a correspondent at Reuters covering the Supreme Court and related issues. Before joining Reuters in 2014, Andrew worked at the Toronto Star as a foreign correspondent, political reporter and feature writer. He is a recipient of a Society of Professional Journalists’ Deadline Club award, the AAAS Kavli science journalism gold award, and Canada’s national newspaper award.

Lawrence Hurley has covered the Supreme Court and related issues for Reuters since 2013. He has written about legal affairs for the bulk of his 21 years as a reporter.

Andrea Januta is an investigative and data reporter with Reuters in New York. Her work has focused on the court system, policing and the U.S. military. Recently at Reuters she was part of a Hillman Prize-winning series on health and safety hazards in military housing that led to three federal investigations, a $386 million emergency inspection program, congressional hearings and new legislation.

Jackie Botts covers economic inequality for CalMatters, a non-profit newsroom covering California politics and policy, where she is a Report for America corps member.
Guillermo Gomez worked as a Reuters Data and Enterprise intern during his graduate studies in the Stanford Management Science department. He currently works for a self-driving car company in Boston, and has formerly worked with the Stanford Basic Income Lab and Stanford Law School Pro-Bono project. 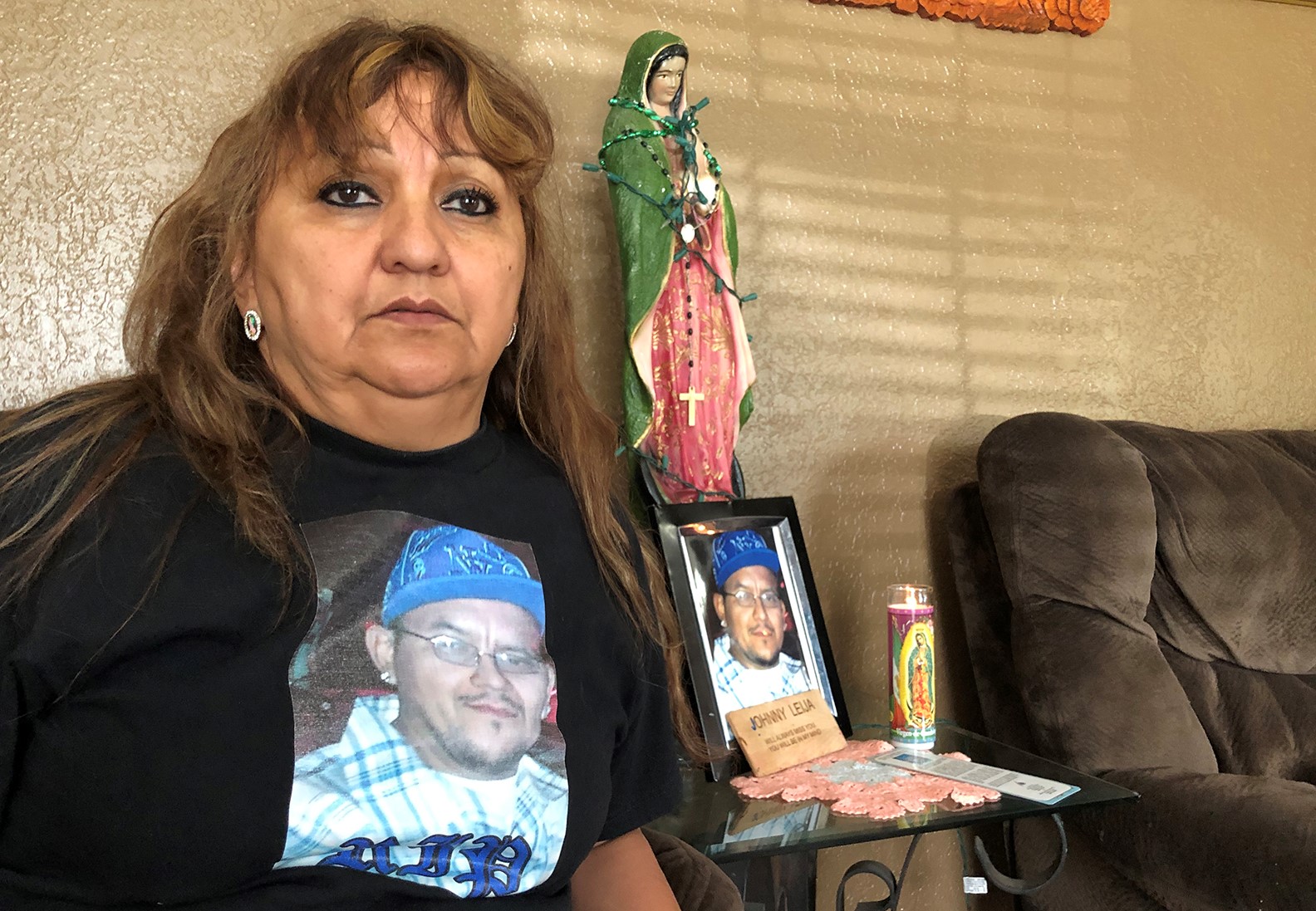 Erma Aldaba sought to hold police liable for her son’s deadly encounter with police, but qualified immunity ended her lawsuit before it could even get to trial.
Andrew Chung

Q: Where did the doctrine of qualified immunity come from?

Andrea: Qualified immunity, a defense often used by police officers if they are sued for excessive force, has its roots in a legal case against police during the fight against segregation.

In 1961, during the civil rights movement, a group of Black and white clergymen set out on a prayer pilgrimage in the south to peacefully protest racial inequality. After they refused to leave a “Whites Only” area of a bus terminal in Jackson, Mississippi, they were arrested and jailed. The clergymen sued the police for violating their constitutional rights in a case called Pierson v. Ray (1967).

The case reached the Supreme Court, where the justices ruled that officers can defend themselves against civil rights lawsuits if they prove they acted in “good faith.” Qualified immunity today stems from this decision, though it has since evolved through additional rulings by the Supreme Court and by lower courts.

Q: Does qualified immunity have a statutory basis?

ANDREW: It does not. Qualified immunity was developed by judges through case law and limits the ability of citizens to sue government officials for civil rights violations, a right that, by contrast, does have a statutory basis in a federal law that dates back to 1871.

Congress could pass a law to change or abolish it, and in fact there are two bills pending in the House to do just that. Last week, Congressman Justin Amash and Congresswoman Ayanna Pressley introduced a bill to end qualified immunity. And on Monday, House democrats introduced the Justice in Policing Act of 2020, which includes a section to abolish qualified immunity for law enforcement officers.

Q: How did your team become interested in qualified immunity?

LAWRENCE: In April 2017, when the Supreme Court declined a plaintiff’s request to hear an excessive force case, Justice Sonia Sotomayor criticized her fellow justices in a dissent for not taking up that case. She argued that the Supreme Court was favoring police by choosing to hear cases appealed by police more often than those by plaintiffs. Justice Samuel Alito pushed back on her statement, saying she didn’t have any data to back it up.

Andrew and I cover the Supreme Court for Reuters and Andrew wrote up the case that day. But we also talked about whether we could dig deeper and determine if data would back up Sotomayor’s claim.

Working with the Reuters data team, we went back through every qualified immunity appeal on excessive force the Supreme Court has received since its 2005 term and found that plaintiffs and police file appeals at roughly the same rate, but the court was 3.5 times more likely to take up an appeal filed by a police officer. So, in the end, Sotomayor was right.

But it didn’t end there. In order to determine which excessive force cases had been appealed to the Supreme Court, we had to build a database of appeals court rulings going back 15 years that provided us with reams of additional data, including our key finding that the overall rate at which qualified immunity has been granted has spiked in the last few years, prompted by recent Supreme Court rulings.

Q: How did the Supreme Court make it more difficult for victims to sue the police in 2009?

ANDREA: When judges are deciding whether to grant qualified immunity, they apply a two-part test: first, they look at whether the force an officer used may have been excessive, and second, whether it was “clearly established” that this force was excessive.

The meaning of “clearly established” has shifted over time, and, as we showed, increasingly favors police.

In practice, to show that the violation was clearly established, plaintiffs need to identify an earlier lawsuit with similar circumstances where a judge ruled that the officer’s force was excessive. This can already be a difficult barrier to overcome, as “clearly established” is often defined extremely narrowly.

In one case we looked at, a judge ruled that a previous lawsuit had established it was excessive to unleash a police dog to bite a compliant suspect in a canal in the woods. But unleashing a police dog to bite a motionless suspect in a bushy ravine was not clearly established as excessive because the circumstances of the cases were not similar enough.

What this means is judges can now grant immunity for egregious behavior because there was no precedent, yet at the same time decline to set a precedent for future cases. In short, the same conduct can repeatedly go unpunished.

Q: Does qualified immunity affect how likely police are to use force, or how much force they use?

ANDREW: This isn’t something we were able to measure, but we spoke with several lawyers who believe this is the case. They told us that the potential for lawsuits could deter police from using excessive force, but qualified immunity can prevent this from happening.

Q: If George Floyd’s family sued the Minneapolis Police Department, how would the two-part test apply to their case?

LAWRENCE: If the lawsuit was in federal court and officers raised a qualified immunity defense, the family would first need to show that the officers violated George Floyd’s constitutional rights. Then, they would need to point to an earlier case that had established that use of force as excessive.

What we found in our reporting, though, is that high-profile cases rarely reach the qualified immunity stage. When a case makes headlines or inspires protests, cities and police departments can come under heavy pressure to settle the case before qualified immunity comes up. Sometimes this happens even before a lawsuit is filed. Officers are more likely to face disciplinary action or criminal charges in these headline grabbing incidents. But these cases are outliers. In most cases, disciplinary consequences are rare, and plaintiffs usually face much higher barriers to holding officers accountable.

For more, see this sidebar on high-profile cases:

Q: What should we expect from the Supreme Court’s upcoming term vis a vis qualified immunity?

LAWRENCE: The Supreme Court currently has several appeals pending asking the justices to consider reforming or abolishing qualified immunity. If the court were to agree in the coming weeks to hear one of those cases, it would hear arguments and issue a ruling in its next term, which starts in October. But it’s unclear if the court is going to take up the issue at this time as there may not be a majority of justices in favor of such a move. If the court turns down the cases, it is possible that Justice Sotomayor will write another dissenting opinion drawing attention to the subject. Further complicating matters, some justices might want to wait to see how the legislation before Congress pans out before taking action.