The Invisible Institute wins the December Sidney for “The Citizens Police Data Project (CPDP),” an interactive database of 56,000 complaint records for more than 8,500 Chicago police officers. Of these, less than 4 percent were deemed to have been substantiated.

A small cadre of officers racked up a disproportionate share of complaints: just 10 percent of the force generated 30 percent of all allegations. Officers were rarely disciplined, even when the complaints against them were deemed well-founded.

The data also suggest racial biases: More than 60 percent of complaints that resulted in officer discipline were lodged by white citizens, even though whites generated only 20 percent of total complaints. White officers were half as likely as their black counterparts to be disciplined for a complaint.

Jamie Kalven, head of the Invisible Institute, waged a decade-long legal battle to obtain the public records at the heart of the CPDP. The data would play a pivotal role in Chicago politics and force the city to confront a legacy of police brutality.

A Chicago police officer shot Laquan McDonald in October of 2014. Kalven uncovered the autopsy report that said that McDonald had been shot 16 times and reported the existence of dashcam video that captured the shooting.

The CPDP database revealed that the shooter, officer Jason Van Dyke, had been accused of misconduct 17 times before, and that none of the complaints against him—for excessive force and racial slurs—resulted in a penalty. Van Dyke was charged with first degree murder on November 24, 2015.

“[Van Dyke] has largely operated with impunity and under a code of silence with the same huddle of officers again and again,” the Invisible Institute’s Alison Flowers told a local news affiliate.

Within a week of the release of the dashcam video, the Superintendent of the Chicago PD was fired and the official responsible for reviewing complaints of misconduct resigned.

The U.S Department of Justice announced this week that it will investigate whether the Chicago Police Department routinely violates the law or the U.S Constitution in their policing. Attorney General Loretta Lynch cited the CPDP’s results as an impetus for the investigation.

“The CPDP is a triumph for transparency and open government,” said Sidney judge Lindsay Beyerstein. “Kalven and his team have uncovered deeply worrying trends and created an invaluable resource that holds public officials to account.”

The Invisible Institute is a journalistic production company on the South Side of Chicago. They work to enhance the capacity of civil society to hold public institutions accountable. The Citizens Police Data Project is a product of a decade-long collaboration with the University of Chicago Law School’s Mandel Legal Aid Clinic.

Jamie Kalven is a writer, human rights activist and founder of the Invisible Institute. Chaclyn Hunt is a police misconduct attorney and organizer. Rajiv Sinclair is a versatile technologist with a focus on data tools and interactive storytelling. Darryl Holliday is an independent journalist, multimedia storyteller and reformed crime reporter. Harry Backlund is the Publisher of the South Side Weekly and works on business development and strategic planning for a range of civic media and literary organizations in Chicago. Alison Flowers is an investigative journalist, a Social Justice News Nexus fellow, and the author of the forthcoming book “Exoneree Diaries: The Fight for Innocence, Independence and Identity” (Haymarket Books, 2016). 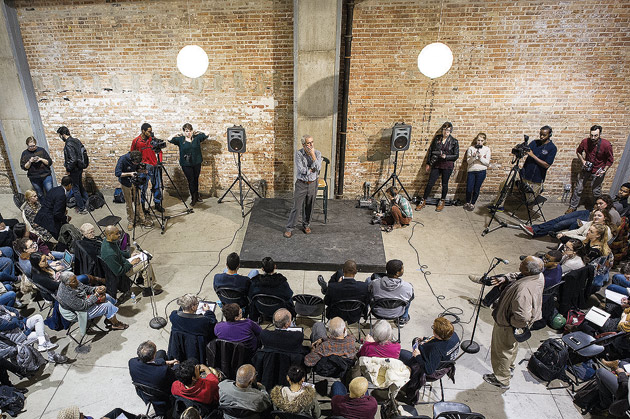 Q: What is the Citizens Police Data Project?

A: The Citizens Police Data Project (CPDP) is an interactive database of all publicly available complaints against Chicago Police officers. With more than 56,000 allegations of misconduct, including complete records of all complaints between March 2011 and September 2015, CPDP is the most expansive public database of its kind. The tool allows citizens to search and filter by individual officer, geographic area, complaint type, complainant race and gender, and immediately see complaint totals and results. The CPDP is designed to benefit journalists, policymakers, and the general public, and to serve as a national model of transparency and accountability in law enforcement.

Q: What are the most striking discoveries that have come out of the CPDP?

A: The portrait that emerges from the data is of a system that ensures virtual impunity for abusive police officers at deep costs to the public.

The database reveals that less than 3% of allegations lead to disciplinary action, with even lower rates for officers charged with high numbers of complaints. The numbers are even more striking when filtering out administrative complaints (typically made by other police officers), which are typically sustained at higher rates than those made by citizens. Of 9,648 allegations of excessive force, the second most common complaint, less than 0.5% were sustained, and only 0.2%, or 20 incidents, resulted in any punishment. The data also shows a significant pattern of racial bias, with black Chicagoans accounting for over 60% of total complaints, and less than 25% of sustained complaints.

Alongside these structural failures, the data shows the relative immunity of officers with extremely high numbers of complaint. Officer Raymond Piwnicki has been accused 68 times of misconduct, the second highest total of the 8,562 officers in the database. (Former CPD officer Jerome Finnigan, who had the highest total number of complaints of any officer, is serving a 12-year prison sentence after ordering a hit on a fellow officer.) Only three of Piwnicki’s complaints have been sustained, and only one, for fighting with another officer, has resulted in any punishment. Full complaint records are available for many of the allegations against Piwnicki, and they demonstrate remarkable consistency from one complaint to the next, yet the only change in Piwnicki’s position have been regular salary increases, and promotion to the rank of detective. In 2013, he received the Award of Valor from then Superintendent Garry McCarthy for an incident in which a suspect was shot and killed.

Q: The data at the heart of the CPDP came from a 10-year legal battle. Describe that fight.

A: The story of the database began a decade ago, when Invisible Institute founder Jamie Kalven was reporting from the Stateway Gardens public housing development. Kalven interviewed a resident, Diane Bond, who had been repeatedly assaulted and sexually harassed by a group of police officers who were known on the street as “The Skullcap Crew.”

Kalven helped Bond make an official complaint and also introduced her to Craig Futterman, an attorney with the police accountability project at the University of Chicago’s Mandel Legal Aid Clinic. Futterman and his students filed a civil rights lawsuit on behalf of Ms. Bond, and in the course of civil discovery requested a list of the Chicago Police officers who had accumulated the most complaints. They received those documents, but under a protective order that barred them from making the information public.

As the Bond case moved toward settlement, Kalven filed a motion on behalf of the public arguing that police misconduct files are critical public information and hence that the protective order should be lifted. The case unfolded over seven years, first in federal court, where the motion was granted and then reversed on appeal, and then in state court. Finally, in 2014, the litigation gave rise to a watershed ruling: the Illinois Court of Appeals held in Kalven v. Chicago that all records of police misconduct should be opened to the public.

The legal battle over police misconduct records is ongoing, and the 56,000+ allegations currently included in the database are a fraction of the number at stake in future rulings. In the wake of the Kalven decision, the City of Chicago granted a FOIA request for the disciplinary history of every officer to serve on the police force from 1967 to the present. The Fraternal Order of Police then intervened, citing the terms of their collective bargaining agreement, and a sympathetic judge imposed a temporary injunction on all records more than four years old. The city has appealed the injunction, and the Invisible Institute has filed an amicus brief in support of the city’s position. If the union prevails, the last half century of CPD disciplinary records – including those related to Chicago’s documented history of police torture – will be destroyed. If we win, they will be made public.

Q: What impact has the project had so far?

A: The release of the database received heavy media coverage locally and nationally, including a major story in the New York Times. Almost immediately the database began to be used by journalists to examine the complaint history of officers involved in incidents covered in the media.

In the weeks after its release, the database had a major impact on media narratives surrounding the release of the video of the shooting of Laquan McDonald just two weeks later. The video, which documented in graphic detail a single incident of severe police abuse, gave public urgency to the issue of police misconduct. In the days after the video was made public, the database and its findings were frequently cited, and Jamie Kalven made dozens of media appearances, shifting the conversation from a single sensationalized incident to the systemic failures of the nation’s second largest police force. Kalven had made known the existence of the dash cam video of McDonald’s shooting death in December 2014, calling on the city to release the footage. In February 2015, having obtained the autopsy report, Kalven broke the story that McDonald had been shot 16 times.

The week after the video’s release saw the firing of Superintendent McCarthy, the resignation of Scott Ando, former head of the Independent Police Review Authority, the agency that investigates police misconduct complaints in Chicago, and the announcement of a wide-ranging federal investigation into the Chicago Police Department. Many factors contributed to these events, but the presence of the database has provided an unprecedented opportunity to debate issues of police accountability on objective grounds.

Q: What’s next for the Invisible Institute?

A: We plan to expand the database to include new datasets, including incarceration rates, public safety spending, high school graduation rates, average household income, crime rates, and others, in order to give a fuller picture of the context in which police misconduct occurs.