Richard Marosi and Don Bartletti win the January Sidney Award for “Product of Mexico,” a multi-media package for the LA Times documenting the brutal labor practices on Mexican farms that produce fruits and vegetables for major U.S. retailers, including WalMart.

The story is the product of an 18-month investigation that took the reporters to 9 Mexican states. Marosi’s words and Bartletti’s images tell the stories of the workers who travel hundreds of miles to work on farms that grow produce for export.

The workers arrive penniless, and high prices at company stores immediately drive them into debt. The pay is often less than promised, but workers can’t quit because farmers illegally withhold their wages. Barbed wire fences and guards discourage any workers who might still be tempted to cut their losses.

“Marosi and Bartletti shine a light on an entrenched system of human trafficking within México,” said Sidney judge Lindsay Beyerstein. “Producers make workers cut their nails to keep tomato skins pristine for the U.S. market, but they force those workers to bathe in irrigation ditches and pick through garbage in search of food to quell their hunger pangs.”

Richard Marosi covers both sides of the U.S.-Mexico border for the Los Angeles Times. He was a Pulitzer Prize finalist in 2013 for his stories about deported immigrants and has reported extensively on Mexico’s drug wars, producing a groundbreaking series on the Sinaloa drug cartel. His corruption investigations in the 2000s contributed to the indictment or recall of more than 10 politicians in Los Angeles County.

Don Bartletti has been a photojournalist with the Los Angeles Times since 1984. “Enrique’s Journey,” his 6-part series of photo essays about young Central American migrants struggling to find their mothers in the United States was awarded the 2003 Pulitzer Prize for Feature Photography, and a 2003 Hillman Prize (with Sonia Nazario). His long career remains dedicated to the causes and consequences of migration between Mexico and the U.S. 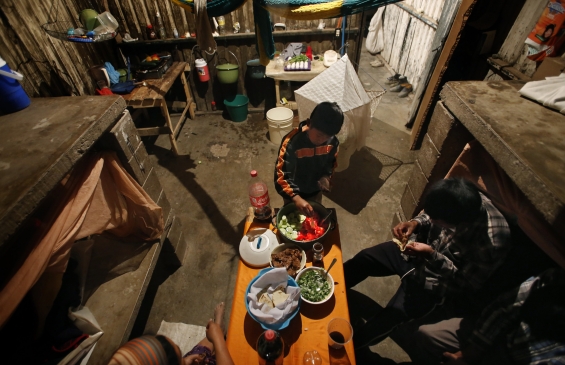 March 28, 2014. 10-yr-old Ediberto Marquez and his family eat supper in a dilapidated 12'x12' room at Campo San Jose in Villa Benito Juarez, Sinaloa, Mexico. The migrant family picks tomatoes and cucumbers for a grower that exports to Walmart stores in the U.S.
Photograph by Don Bartletti/Los Angeles Times

Q: How did you use documents to trace produce from farms in Mexico to supermarket shelves in the United States?

A: A great reporting challenge was to connect the dots to show how produce picked under abusive conditions makes its way to American supermarket bins and restaurants. Information on the sources of produce sold in the United States is largely proprietary and closely held. I found the elusive puzzle pieces in Mexican government export data, produce industry pricing surveys and inspection reports by California food-safety regulators. From these and other sources, I was able to reconstruct the supply chains linking particular Mexican farms to particular U.S. retailers.

Q: Pickers leave their villages to make money, but many return with debts instead of savings. How is this possible?

A: It’s due to a combination of low wages and high prices at the company stores. Workers fall into debt the moment they enter a labor camp because they arrive penniless. Stores sell everyday items on credit and workers spend the rest of the season trying to repay their debts. But wages are often much less than promised and workers can’t leave unless they pay what they owe.

Q: What tactics do farm owners use to control the farm workers?

A: Many farms withhold wages, especially during peak harvest seasons. This tactic is common even though Mexican federal law requires weekly payments. Laborers, penniless and hundreds of miles from home, are essentially trapped. If they escape from the farms, they forfeit the wages they’ve already earned. Agribusinesses also exert control by preventing laborers from leaving if they owe debts to the company store. Barbed-wire fences, guards and early curfews discourage escape attempts.

Q: How widespread is the problem of child labor on Mexican farms exporting to the United States?

A: Child labor has been largely eradicated at the biggest farms with direct contracts with U.S. retailers, but the problem persists at smaller farms. Produce picked by children at these farms gets to the U.S. through chains of brokers and distributors. A chile pepper picked by a child can change hands five times before it reaches store shelves in the U.S.

Q: Mexican agribusiness relies on a pool of desperate workers who are willing to travel long distances. Why is the economy so bad in their home towns?

A: Farm laborers are typically recruited from indigenous regions of Mexico where jobs are scarce. Many are subsistence farmers whose harvests of corn and beans are often damaged by drought or inclement weather. NAFTA trade policies have also put Mexican peasant farmers at an economic disadvantage against large U.S. corn producers.

Q: This series was published in English and Spanish. Is that routine for the LA Times, or was the Spanish edition a special offering?

A: The LA Times doesn’t typically publish stories in Spanish, but did so for “Product of Mexico” so it could reach a wider audience in Mexico.