McClatchy and ProPublica win the October Sidney Award for “Contract to Cheat,” a year-long investigation showing that roughly 10 million construction workers are being misclassified as independent contractors. The scam harms workers and cheats taxpayers out of billions of dollars, but regulators have done nearly nothing about it.

Over the course of a year, they interviewed hundreds of construction workers, company owners, officials, union leaders, statisticians, and economists.

The team found that taxpayers lose $400 million a year in tax revenue to misclassification in Florida, nearly $500,000 from North Carolina, and $1.2 billion from Texas. Misclassified employees miss out on unemployment insurance payments and sometimes worker’s compensation. If just 20 percent of workers in the construction industry are misclassified, a very low estimate, the federal government is missing out on $8.5 billion a year from that sector alone.

Franco Ordoñez is Washington correspondent for The Charlotte Observer and covers immigration and labor for McClatchy. His work has been honored with the Casey Medal, Gerald Loeb and Robert F. Kennedy journalism awards.

Mandy Locke joined The News & Observer in 2004. Her reporting has been honored with a Gerald Loeb Award and Michael Kelly Award.

David Raynor is database editor for The News & Observer. He has worked on several award-winning projects, including “Prognosis: Profits,” which won more than 10 national journalism awards. 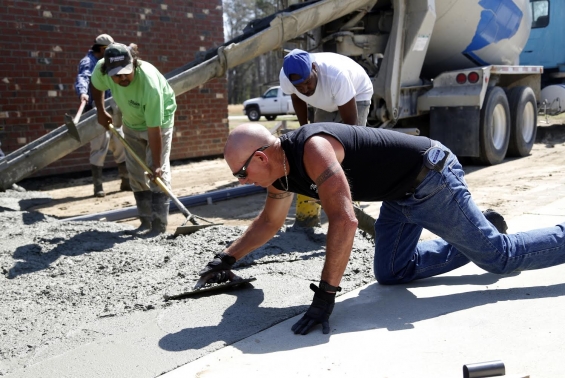 Jimmy Tyndall, foreground, pours a concrete driveway for a private homeowner. Tyndall is one of hundreds of honest employers undercut by companies that cheat. McClatchy's investigation, Contract to Cheat, showed how labor misclassification has hurt businesses, exploited workers and robbed taxpayers while regulators did little to stop it.
Travis Long/The News &amp; Observer

Q: How did you decide to launch into a year-long investigation into misclassification in the construction industry?

A. This series builds on the excellent work by Mandy Locke for our Raleigh paper, The News & Observer, in 2012. Then, she found that good contractors were being undercut by competitors who didn’t follow the rules. She realized from that reporting that the labor violation was incredibly widespread, was costing the public huge amounts of money and was exploiting workers. N&O investigative editor Steve Riley saw the potential for a McClatchy-wide story. We brought in Franco Ordoñez, a national reporter who covers labor and immigration issues in the McClatchy Washington bureau. Ryann Grochowski Jones at ProPublica and David Raynor at The N&O crunched the data, which enabled us to quantify just how much misclassification costs taxpayers. One of the key findings of our series was not just that misclassification is so endemic, but that the federal government enables it by failing to crack down on federal contractors. We found that in the oversight for President Barack Obama’s 2009 stimulus bill, no one really bothered to check for violations of misclassification.

Q:  “Contract to Cheat” was a collaboration between a number of news outlets, tell us how you worked together to create the series?

A. McClatchy is in the fortunate position of having 29 newspapers in communities across the country. This gives us an amazing reach and the ability to really nationalize important local stories such as this one. Mandy and Franco guided McClatchy reporters in South Carolina, Miami, Fort Worth, Kansas City, Fresno, Calif., and Belleville, Ill., in requesting public records from their housing authorities and developing local reports. The collaboration helped us get a handle on the national story through the reporting of people who know their communities best, and I think that was a real strong point in the series. We also had assistance from data reporter Ryann Grochowski Jones at ProPublica, who helped us develop the tax-loss formula that showed how much is lost because of the tax cheating associated with misclassification, another strong aspect.

Q: You used the Freedom of Information Act and state-level freedom of information laws to obtain the records showing how construction companies working on public contracts were classifying the people who worked for them. How did you overcome institutional resistance to your requests?

A: We looked at thousands of payroll forms that federal contractors file to state and local regulators who collect them on behalf of the federal government. Those forms showed how companies wrongly classified workers as independent contractors to avoid paying state and federal taxes. They also often denied workers unemployment benefits and overtime and workers compensation. Resistance came primarily from the federal government, with the Housing and Urban Development Department blocking our access to records at regional offices. The News & Observer and the Charlotte Observer filed a lawsuit to obtain access and collected tens of thousands of pages. We filed dozens of open records requests at local housing authorities across the country. The records showed us the scope of the problem. We learned, for example, that misclassification is more prevalent in the South. But in many ways the payroll records were just the start. Reporters then used that material to crunch data and to find workers to talk with about their experiences in the construction industry.

Q: This summer, President Obama pledged to crack down on federal contractors who break the law. Have you seen any evidence that the president is making good on this promise?

A.President Obama issued the executive order this summer after we had begun sharing findings with the administration. It prohibits the federal government from doing business with contractors with a history of problems, and requires federal contractors to tell their workers in writing if the workers are considered independent contractors. The rules on the order are still being written. It’s unclear to regulators, though, whether the order would have applied to the 200 housing projects McClatchy reviewed.

Q: This project synthesized a tremendous amount of data from numerous sources. What did you learn in the process that you will carry on to other reporting projects?

A: It helped us to have Mandy and Franco guiding other reporters in which public records we needed and how to comb through them. And we figured out early on to turn to experts such as Ryann at ProPublica. We were fortunate, as well, in having the experience of David Raynor, the longtime and award-winning database editor at The News & Observer. As is probably the case in most big projects, we could have started earlier and been more organized. We’ve already done an after-action report on “Contract to Cheat.” In future projects that involve collaboration across newsrooms, we know we’ll work to improve communication.

Q: What can be done to reduce misclassification?

A. Experts tell us that there needs to be more education of regulators on misclassification, and required training for federal contractors. They suggest the government not accept payroll records from contractors that don’t pay their workers’ taxes, as this is a sign of a contractor dodging labor and tax law. In some places, contractors have worked together to root out bad actors from the industry. Some states are using data analytics to comb through records and find patterns of unpaid taxes.