The Post and Courier wins the September Sidney Award for “Till Death Do Us Part,” an investigative multimedia series examining South Carolina’s domestic homicide crisis.

More than 300 women have been killed by men in South Carolina in the past decade. At the time the series was published, the state had the highest rate of male-on-female murder in the country. An 8-month investigation by Doug Pardue, Glenn Smith, Jennifer Berry Hawes and Natalie Caula Hauff found sexism and guns were to blame for a death rate more than twice the national average.

Through interviews with survivors, prosecutors, police, judges, pastors, and legislators, the reporters discovered that deep-seated conservative attitudes about the sanctity of marriage and a man’s control over his household make the heavily male-dominated state legislature reluctant to support battered women, impose meaningful penalties for batterers, or keep guns out of the hands of known abusers.

All 46 of the state’s counties have animal shelters but only 18 have domestic violence shelters. At least 380 women fleeing abuse were turned away from a shelter between 2012 and 2013.

The story is having a major impact. The SC House Speaker empaneled a committee to hold immediate hearings and have a bill ready on the first day of the upcoming General Assembly to improve the state’s domestic violence laws.

Doug Pardue is a projects reporter for The Post and Courier in Charleston, S.C. Before joining the Charleston paper, he was news projects editor for USA Today.

Glenn Smith is projects editor for The Post and Courier. He is a 2014 H.F. Guggenheim Journalism Fellow and was named South Carolina’s Journalist of the Year for 2012.

Jennifer Berry Hawes is a feature writer for The Post and Courier who covers faith and values with a special interest in social issues.

Natalie Caula Hauff is a former court reporter for The Post and Courier. She helped produce “Till Death Do Us Part” before leaving the newspaper to take a job as a media relations coordinator for Charleston County government. 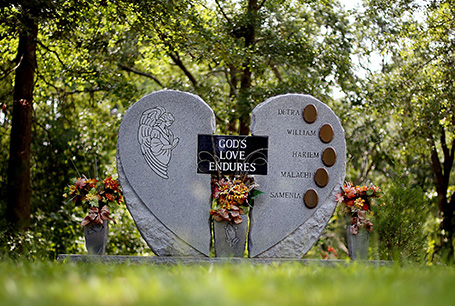 The grave of Detra Rainey and her four children, who were shot to death by her husband in 2006 in North Charleston.
Post and Courier

Q: How did you decide to do an in-depth story on the domestic violence crisis in South Carolina?

A: Doug was considering the topic as a follow-up story for a series he wrote in early 2013 titled “Forgotten South Carolina.” That series took an inside look at why South Carolina is at the top of every list you want to be at the bottom of, and at the bottom of every list you want to be at the top of when it comes to education, healthcare and economic opportunity. Then, the Violence Policy Center last September ranked South Carolina as the deadliest state in the nation for women at the hands of men. We looked back and realized the state had been in the top 10 for more than a decade. Why was that the case?  Why weren’t people talking about it more? And why had we not focused more on the problem than writing an occasional story every time the rankings came out? The day the state’s shameful No. 1 ranking came out, the state domestic violence coalition hosted a conference call with experts to discuss the issue and invited media from across the state to participate. Our reporter was the only one to call in. It got us talking about the scope of the problem and our state’s antipathy toward acknowledging it. The more reporting we did, the more we realized domestic violence was a serious, poorly addressed crisis for the state, and deserved a long, hard look at why and what could be done to change that.

Q: This is a very data-heavy story. What resources did you use to get the quantitative information?

A: We compiled a database of all known domestic violence homicides over the past decade. As a starting point, we used annual reports from the S.C. Attorney General’s Office which list the names of domestic murder victims and a brief synopsis of their cases. We then used police reports, court records and other documents to determine the time of the day for each crime, the weapons used and other key details to look for trends. We also ran hundreds of criminal background checks to look for past convictions for domestic abuse and violence. Through Freedom of Information Act requests, we assembled databases of court dispositions to determine conviction rates for criminal domestic violence cases  - something our state judicial system does not do.

Q: You don’t shy away from the term “patriarchy” in describing South Carolina culture. How does male dominance contribute to spousal murder?

A: South Carolina was settled as a patriarchal state, economically, socially and politically. Economically: the state’s early dependence on slavery resulted in a haves and have nots system, brutally enforced from the top down – authoritarian.  Socially: the plantation system created racial, class and sexual tiers in which women were relegated to passive roles, subservient to their husbands. Politically:  Much of the governing system of South Carolina came from England where rules were made largely by men – a small group of men. In South Carolina it was the Lords Proprietors who governed. Even today, the state ranks 49th in the nation for women elected to its Legislature. When domestic violence legislation goes before the state Senate, just one woman is there to cast a vote. Culturally, the state clings to conservative religious tenets and traditional notions about the sanctity of marriage and women’s place in the home. This helps reinforce the belief that every man’s home is his castle and what goes on there stays there. Combine that with poverty, educational deficiencies and a general lack of opportunities in many corners of the state, and it’s easy to see why domestic violence remains a silent epidemic in many communities until blood is shed.

Q: You found that nearly 70% of women murdered by their intimate partners die by gunshot. What needs to be done to keep guns out of the hands of abusers?

A: The experts say South Carolina should adopt a state law that mirrors a federal prohibition that prohibits gun possession by those convicted of criminal domestic violence or facing an active restraining order. This would give state and local authorities greater oversight and enforcement power to make sure abusers are abiding by the gun ban. The state also could authorize law enforcement to remove weapons from the homes in question. More than a dozen states already bar possession of firearms by domestic violence offenders. More than two-thirds of the states and the federal government prohibit firearm possession by abusers who are subject to domestic protective orders. Legislation to bring South Carolina in line with these states died in the past session in committees without a vote taking place.

Q: This story tackles a controversial topic and raises the hot-button issues of sexism and guns. What has been the reaction from the community?

A: So far the reaction has been all positive. The Speaker of the SC House empaneled a committee after the series ran to hold hearings immediately and have a bill ready on the first day of the upcoming General Assembly to improve the state’s domestic violence laws. But as you recognize from your question that could be difficult because of the state’s gun rights culture and a continued tolerance of sexism.