Jay Root wins the August Sidney Award for “Hurting for Work,” a Texas Tribune series, which illustrates how laissez-faire policies created the “Texas Miracle” on the backs of workers.

Texas is the only state where firms of any size can opt out of the state workers’ compensation system. As a result, one out of every five Texas workers is excluded from the public system. Some employers opt for unregulated private plans that give workers few rights if they are injured on the job.

Six percent of working Texans “go bare,” meaning that they have no workers’ compensation insurance at all. “When these people are hurt, they often end up begging charities to help them, turn to federal disability programs or, if they are in the country without papers, get sent back home to fend for themselves,” Root explained.

“Hurting for Work” tells the stories of Texans whose lives have been upended by on-the-job injuries and inadequate insurance coverage.

“The series has had real impact,” said Sidney judge Lindsay Beyerstein, “the Texas Division of Workers’ Compensation fixed the defects the Tribune found in their 24-hour safety hotline and made live operators available 24 hours a day for the first time in 20 years.”

Jay Root, a native of Liberty, Texas, is an award-winning reporter for The Texas Tribune. Root previously covered politics at the Associated Press and was Austin bureau chief of the Fort Worth Star-Telegram from 1997 to 2008. Root is the author of “Oops! A Diary From The 2012 Campaign Trail,” an insider’s account of Texas Gov. Rick Perry’s dramatic collapse in the 2012 presidential race. The e-book was released in September, 2012. 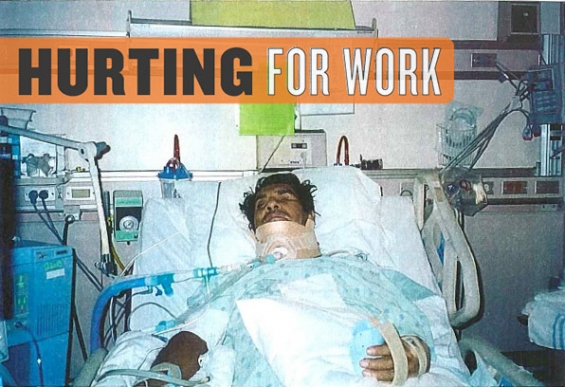 Q:  How did you get interested in Texas’ workers’ comp system?

A: There had been a discussion in our newsroom about the “Texas miracle” that our politicians often refer to in their stump speeches. Along with that discussion came the natural journalistic desire to measure it, test it, analyze it. While Texas can rightly brag about job creation figures, we collectively wondered where the miracle might not be living up to the advertising. I took the very simplistic approach of taking a deeper look at the jobs picture. What kinds of jobs are we creating? What distinguishes the workplace in Texas? What kinds of protections do the workers in them have? What about when things aren’t so miraculous at work, and something bad happens? Around the time the discussion began in the newsroom, the federal job fatality figures became a topic in the news, and as it turns out Texas saw more than a 20 percent jump in its fatalities at a time when those figures were dropping elsewhere. Knowing that Texas is the only state that does not require private employers to carry workers’ compensation insurance, I wondered what happened to people who died working for employers without that coverage. That brought me into contact with people who are involved in worker injury and fatality issues and I started hearing really heartbreaking stories about these Texans. From then on I got hooked on this project.

A: Texas is the only state that allows private employers of any size to completely opt out of workers’ compensation insurance or a private equivalent. As a result, one in five workers are not covered by workers’ compensation insurance. Many of these workers (an estimated 14 percent of the workforce) get private occupational insurance, but those plans are not regulated by the state and often have sharply limited rights when they are injured or killed. There are more than a half million workers, representing about 6 percent of the Texas workforce, whose employers have decided to “go bare,” meaning there is no occupational insurance whatsoever. When these people are hurt, they often end up begging charities to help them, turn to federal disability programs or, if they are in the country without papers, get sent back home to fend for themselves.

Q: Tell us about Crystal Davis, her late husband Wayne, and Crystal’s battle with Burger King.

A: Crystal Davis is a stay-at-home mother from Tyler, Texas. In September 2012, her husband Wayne left for work in the Chrysler 200 provided by his employer, Burger King. Less than two hours after Wayne left, Crystal was called back home. When she got there, two state troopers told her what no wife and mother of two young children would want to hear: her husband had been killed in a car wreck just east of town, on his way to visit a Burger King restaurant in Coushatta, Louisiana. Soon Crystal had buried her husband and was suddenly dealing with a mountain of bills. She had never thought of workers’ compensation insurance, but since Wayne’s job was “90 percent” travel — visiting franchises to help them improve profits — she filed for death benefits, which are supposedly guaranteed by the state’s workers’ compensation law. Though the administrative process is notoriously difficult to navigate, Crystal won at all three stages inside the Division of Workers’ Compensation. But then the insurance carrier, ACE American, sued her — and her kids, Cash and Lucy — to stop the payments. Their argument: Wayne was not in the “course and scope” of his employment even though he was in a company car fueled with company gas on his way to pre-announced appointment. The insurer and Burger King declined comment, but workers’ advocates say such aggressive behavior by insurance companies has increased since the conservative Texas Supreme Court — in a split 5-4 decision — ruled that workers’ compensation claimants can no longer sue insurers for “bad faith” dealings on such claims. The case was dragging on for months with no end in sight. But airing her story publicly made a big difference at the courthouse. Two days after we published the story of her battle as part of this series, Crystal called to tell me that the ACE had decided to drop its case. She directly attributed the unilateral decision to the publicity that The Texas Tribune brought. That publicity had a multiplying effect, because Crystal’s story was picked up by the leading Tyler TV station. The insurer’s decision to drop the case cleared the way for Davis and her children to continue receiving the death benefits they were entitled to after Wayne Davis’ tragic death in 2012. More broadly, the lawsuit ended before it got to the appellate courts, where an adverse ruling could have negatively impacted the rights of Texans whose loved ones die in car accidents while working.

Q: Many Texans are covered by private occupational insurance. How does that tend to affect their rights and benefits if they get injured at work?

A: First, these private occupational plans are not regulated by the state, so the companies that offer them can choose what level of benefits to offer. This also gives the employer control over which doctors the workers see. Certain due process rights that are included in the workers’ compensation law — such as the length of time an employee has to report a claim or certain dispute provisions — aren’t guaranteed by the state. Also, thanks to a Supreme Court decision known as Bouchet, the provision in state law that protects workers from being fired for filing an injury claim does not apply to companies that are outside the workers’ compensation system. Therefore, these “non-subscriber” companies can fire employees who get injured on the job without fearing a state retaliatory firing lawsuit. Technically, employers who opt out of the workers’ compensation system in Texas lose the “exclusive remedy” provision of the law. That provision protects companies carrying workers’ compensation from being sued for negligence in a worker injury case. However, in many cases employers who opt out still protect themselves from negligence lawsuits by requiring their employees — as a condition of taking the job — to sign binding arbitration agreements that sharply limit a worker’s rights in a legal dispute.

Q: Was there anything that you wanted to include in the series, but had to leave out?

The results from “Hurting For Work” did not end with Crystal Davis. After the Tribune reported on lapses in the state’s duty to maintain a 24-hour safety hotline, the Division of Workers’ Compensation responded by fixing glitches identified by the Tribune and, later, adopting brand new procedures that ensure a far more robust effort. For the first time in over two decades, the state has eliminated its voicemail system and is staffing the hotline around the clock to ensure work safety violations don’t slip through the cracks.