The official death toll stands at just 64. Several media reports estimate that about a thousand people have died, but Schwartz reports that the true number is likely higher and definitely still climbing. Hurricane Maria may ultimately surpass Hurricane Katrina, which killed 1800 people, as the deadliest natural disaster in U.S. history.

Relatively few Puerto Ricans drowned during the storm, but the slow recovery of electricity and clean water are causing a disaster in slow motion. Health care workers are toiling in stifling hospitals and at least one patient has died of heat exposure due to the lack of air conditioning. Conditions are ripe for outbreaks of infectious disease. Suicide rates have nearly doubled.

The federal government is already starting to pull back from the recovery effort, even though half the island is still without electricity.

“The federal government’s response has turned a natural disaster into a man-made catastrophe,” said Sidney judge Lindsay Beyerstein. “We applaud Schwartz and Black for keeping the plight of Puerto Rico in the national spotlight; the government cannot be allowed to declare victory and go home while our fellow citizens are dying in darkness.”

“[T]he words that the White House uses to talk about its response — us-versus-them, understating the death toll, complaining about the high cost — suggest that Puerto Rico isn’t getting the treatment that it would if it were among the fifty states, with the ability to cast Congressional and electoral votes,” said Schwartz in our Backstory interview.

The story contrasts the grudging government response with the valor and generosity of Puerto Ricans like Ernesto Matos Santana, a 79-year-old fisherman who braved 50-mile-an-hour winds in a tiny boat to rescue 15 families.

“Whoever needs the help, we have to help,” Matos Santana said. “Porque son mi gente.”

Mattathias Schwartz is a freelance journalist living in Washington, D.C. “A Massacre in Jamaica,” his New Yorker investigation of the extradition of Christopher Coke from Kingston, Jamaica, won the 2011 Livingston Award for International Reporting.

Matt Black is a photographer with Magnum Photos. His work has explored the connections between migration, poverty, agriculture, and the environment. He received the W. Eugene Smith Award in 2015. In 2016, he received the Robert F. Kennedy Journalism Award and was named a Senior Fellow at the Emerson Collective. 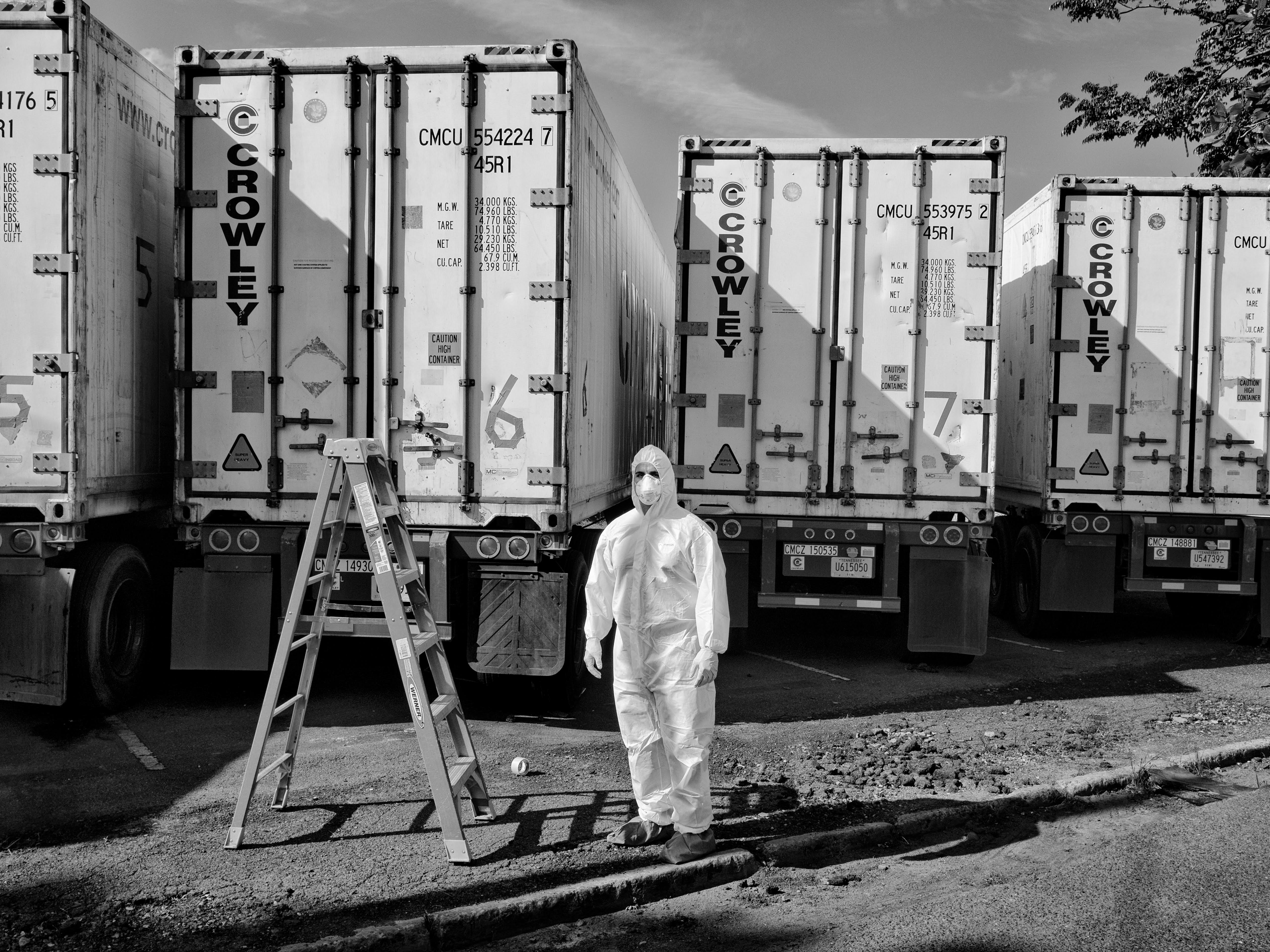 Trailers Full of Bodies: Near the Institute of Forensic Sciences in San Juan, 11 refrigerated FEMA trailers served as an overflow morgue. They were guarded by the Army Reserve’s 246th Quartermaster Company (Mortuary Affairs).
Matt Black/Magnum Photos for New York Magazine

A: The official death toll is still under 70, although Puerto Rico’s governor, Ricardo Roselló, has ordered an official review and recount of all deaths since Hurricane Maria to see if there are any storm-related casualties that might have been missed. It does seem that the initial count is far too low. Mortality across the island for the months of September and October increased by more than 1,000 people, or around 20 percent, and the consensus among epidemiologists is that all of those extra deaths above the established demographic baseline should be attributed to the storm and its consequences.

Q: When we think of hurricane-related deaths, we tend to focus on deaths during the storm, but the true death toll of a major storm keeps climbing long after the winds have died down and the floodwaters have receded. What are some of the less well-known ways in which the aftermath of Hurricane Maria is killing Puerto Ricans?

A: The lack of electricity on the island has also been driving up mortality rates. It took more than 100 days to restore power to just half of Puerto Rico’s population, and more than one million people still lack access to electricity. We know that a lack of electricity is associated with an increase in mortality, particularly in hospitals and long-term care facilities. There has also been a substantial increase in the number of suicides since the storm.

Q: Many of the Island’s hospitals remain in the dark. What does the research tell us about the impact of power outages on hospital mortality rates?

A: To quote our story, “A study of power outages in Ghana over a five-year period found a 43 percent increase in patient mortality on those days that a health-care facility loses power for more than two hours … In August 2003, just one day without electricity in New York City caused a daylong 28 percent increase in overall mortality.” I also heard concerns from doctors at the Centro Médico, Puerto Rico’s largest and most sophisticated hospital, that a request made for a back-up generator to stop intermittent and dangerous blackouts took the federal government more than a month to fulfill.

Q: Puerto Rico is an “unincorporated territory,” which, as you point out, is a euphemism for a colony. How is colonialism affecting the hurricane response?

A: I’m not sure “colonialism” is exactly the right word, as Puerto Ricans are U.S. citizens who are free to immigrate to the mainland. So there is some pretense of equality. But the words that the White House uses to talk about its response — “us”-versus-“them”, understating the death toll, complaining about the high cost — suggest that Puerto Rico isn’t getting the treatment that it would if it were among the fifty states, with the ability to cast Congressional and electoral votes.

Q: You reported that energy statistics are being deceptively reported on the official recovery website. How might these numbers be misleading?

A: I spoke with an engineer who is helping to organize the response. He indicated that these numbers measure electrical capacity, not the percentage of customers who have access to electricity. For months, Puerto Rico’s electric utility claimed that the latter statistic wasn’t available. A few days after our story appeared, they began reporting it.

Q: How should we measure whether the federal response to Hurricane Maria is equitable and adequate for Puerto Rico?

A: The question in my mind is what we as Americans consider to be the minimum standard of living that all citizens deserve. If that includes providing electricity to homes, it’s clear that the federal response has fallen short.