Ese Olumhense of Reveal wins the November Sidney Award for “Big Lie Proponents Are Creating Harsh Criminal Penalties for Elections Activity,” a nationwide analysis showing the increasing involvement of law enforcement in the voting process, which Olumhense identifies as the most intense voter suppression threat in decades.

Since 2020, at least 130 bills have been introduced in 42 states to enlarge the role of the criminal justice system in investigating and punishing alleged voting infractions. Of those, 28 have passed in 20 states. Some of the new laws have made national headlines, such as Georgia’s prohibition on handing out food or water to people waiting in line to vote and Florida’s new law enforcement agency dedicated to policing voting.

This wave of legislation is a direct response to the “Big Lie” that Donald Trump lost the 2020 election because of voter fraud. Countless investigations initiated by Republicans have failed to uncover any evidence of outcome-changing fraud in 2020. Republican state legislators have primarily pushed bills to criminalize minor voting infractions whereas their Democratic colleagues have focused on toughening penalties for intimidating voters.

Under the influence of the conspiracy film “2000 Mules,” Republicans have focused on criminalizing ballot collecting. The innocuous practice, which remains legal in many states, simply means dropping off someone else’s absentee ballot. In Arizona, a former Democratic mayor, Guillermina Fuentes, pled guilty to a felony for handling the ballots of four people. Fuentes was sentenced to 30 days in county jail for helping her neighbors vote legally; while a Republican who filled out her dead mother’s ballot for Trump only got probation.

Ese Olumhense is an investigative reporter for Reveal, covering democracy. A Native New Yorker, she is also an adjunct professor at the Columbia University Graduate School of Journalism. 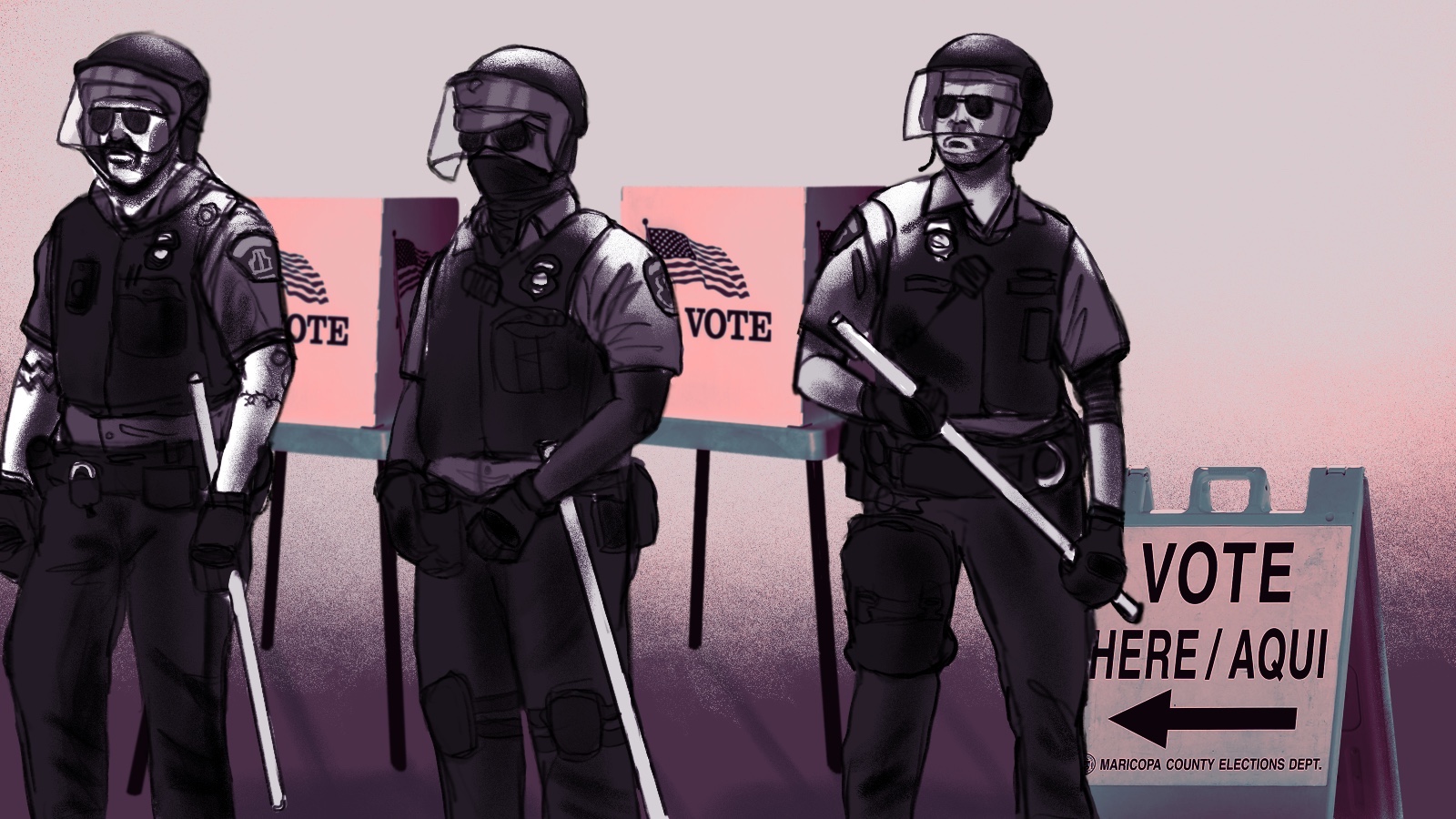 Q: What is the Big Lie and how does it relate to these state-level voter suppression bills?

A: The Big Lie is shorthand for the myth that rampant voter fraud cost former president Donald Trump the 2020 presidential election. We know – based on numerous lawsuits, audits, and studies of voter fraud, even those commissioned by Republicans – that Trump legitimately lost the election. It was not stolen.

As a reporter chronicling the ways our democracy is imperiled, I’ve come to see the Big Lie as a kind of nesting doll of lies. Post-2020 election denial has spawned lots of smaller, companion myths: that American elections are fundamentally unsafe; that absentee and mail ballots are vectors for rampant fraud; that more aggressive policies are needed to identify and prosecute these crimes.

Our reporting shows that election deniers all over the country are pushing laws that would increase the involvement of law enforcement – police and prosecutors – in the voting space. At least 130 bills have been introduced since the 2020 election that would create new election investigative agencies, empower law enforcement to investigate such crimes, or establish or ramp up penalties for these offenses.

Of course, this is all based on very thin evidence. We know there is no widespread voter fraud. And in states that have changed laws around elections in recent years, we’re already seeing great law enforcement investment in prosecuting voters who violate these rules. It’s not always about illegal voting, either – in Arizona, people are being prosecuted for violating rules against ballot collecting and delivery, things that were previously commonplace.

A: “2000 Mules” is a 2022 movie produced by prominent election denier Dinesh D’Souza, with the troubled nonprofit True the Vote. The film purports that a network of left-wing actors, including nonprofit organizations and individuals working as ballot traffickers or “mules,” stole the 2020 election from Trump using absentee and mail ballots.

In making this claim, the filmmakers say they used a raft of cellular geo-data to analyze travel patterns around ballot box locations in battleground states.

The data haven’t stood up to scrutiny, and don’t support the conclusion that the film draws. Law enforcement officials around the country – including Bill Barr, who headed the Department of Justice under Trump — have criticized the movie’s lack of evidence.

Q: Your project is a systematic accounting of voter suppression bills nationwide. Do you have any tips for journalists undertaking a nationwide survey of state law-making? (Opportunities, potential pitfalls, etc?)

A: When we started work on the project, I was looking at each state’s election-related bills using the respective state’s legislative website. Although this method of reporting was enough to help us identify some trends, this was hard and tedious work. Critically, the kind of research made comparing bills in a uniform way difficult.

LegiScan simplified and standardized the research process. The tool, which indexes legislation introduced in the 50 states and Congress, can be mined, meaning we could automate our searches and better identify and analyze the bills we found. Journalists interested in learning about this tool can sign up for Reveal’s Reporting Network, which will be running a training on it next month.

Of course, LegiScan was just a starting point for our reporting. We still had to read through the bills and classify them based on the patterns we were seeing. But it enabled us to search for bills better and present our findings with more authority.

Q: How do today’s voter-suppression laws fit into our nation’s long history of racialized voter suppression?

A: The proliferation of election crimes laws represents the latest wave of voter suppression efforts to emerge in the United States.

Unfortunately, our country has a really deep history of racist voter suppression, and it was important to us to ascertain how what we were seeing fit in with all this.

Civil rights groups and voting experts we spoke to made it very clear that voter suppression is adaptive, meaning that it changes with time. For example, there was a moment in history where voters would be asked to count the jellybeans in a jar, or read parts of the constitution, to vote. States are not doing things like that anymore but actors in some jurisdictions are trying to frustrate the vote and chill turnout by imposing laws that people simply don’t want to violate.

Q: What role are local sheriffs playing in voter intimidation? Why are sheriffs so prominent in this regard?

A:  Sheriffs are increasingly being drawn into the voting process. There is an alarming movement of so-called “constitutional sheriffs,” who claim their law enforcement powers supersede those of even the U.S. President. This group has expressed interest in enforcing election laws, and some members of the Constitutional Sheriffs and Peace Officers Association mobilized ahead of the 2022 midterm elections.

In the voter prosecution case we chronicled in our story, the local sheriff in Yuma County, Ariz., was instrumental in the investigation and prosecution of two women who collected and returned legal, signed ballots on behalf of other voters.

Through public records requests and court records, we obtained bodycam footage and case reports that illustrate the sheriff’s, and later the attorney general’s, efforts to investigate the incident. Law enforcement fingerprinted one woman to compare her prints to all the ballots in a dropbox, even sending those prints to the FBI to analyze at its Quantico, Virginia, headquarters. And earlier this year, Yuma County Sheriff Leon Wilmot said that his office is investigating 16 more election-related cases.

Q: Are these laws being enforced? How many people are going to jail for helping their neighbors vote?

A: Last month, the Arizona Attorney General’s office announced two new prosecutions related to ballot collection. We’ll know more about how the new laws are being used elsewhere in the U.S. after the midterm elections.

Reveal plans on updating our database of election crimes laws, for citizens, journalists, and other researchers to use. We’ll also be following investigations and prosecutions of voters happening in states that have enacted new election crimes legislation.