Michael Hiltzik, the business columnist for the Los Angeles Times, wins the June Sidney for an outstanding series of columns about economics in the era of Trump. Published in May 2019, these columns shed light on the various ways the economy is rigged to favor the rich and powerful.

Hiltzik wrote about a new analysis of the Trump tax cuts by the Congressional Research Service, which found that the cuts have failed to create jobs, boost wages, or pay for themselves.

Hiltzik also blew the whistle on the Trump administration’s underhanded bid to redefine poverty by changing how we measure inflation.

In another column, Hiltzik observed that rich farmers (including Sen. Chuck Grassley’s relatives) will get the benefits of Trump’s bailout while family farmers suffer from Trump’s trade war with China. Hiltzik also showed how Trump’s multi-billion dollar farm bailout means that we’re paying for his tariff wars twice.

“Hiltzik is a master of the daily column format, managing to break news on a wide range of stories of interest to working people,” said Sidney judge Lindsay Beyerstein.

Michael Hiltzik is the business columnist for the Los Angeles Times. As a member of the Los Angeles Times staff for more than 30 years, he has been a financial and technology writer and a foreign correspondent in Africa and Russia. He shared a Pulitzer Prize in 1999. He is the author of six books. His seventh book “Iron Empires: Robber Barons, Railroads, and the Making of Modern America,” will be published in May 2020 by Houghton Mifflin Harcourt. 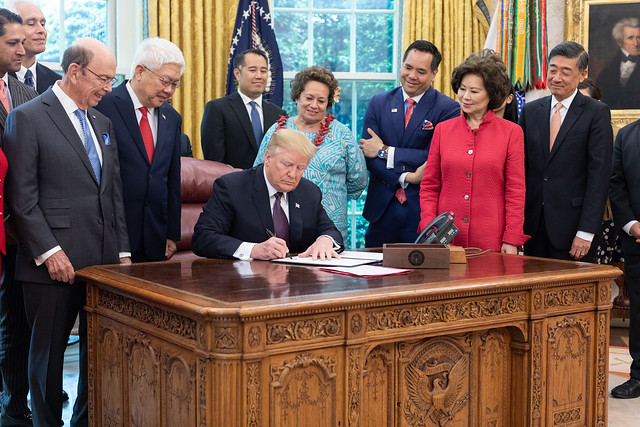 Q: Who are your most important journalistic influences?

A: Two paramount influences stand out. One is George Orwell. Although most readers know him chiefly as the author of 1984 and Animal Farm, it’s through his columns and essays from 1939 to his death in 1950 that he left his mark on journalism and commentary—unfailingly judicious, often acerbic, invariably penetrating work on astonishingly varied topics from anti-semitism to the use of language to obscure and mislead (“Politics and the English Language”), Gandhi considered not merely as a moral force but a political figure, and the proper way to make tea. A 1,400-page edition of his collected essays is always near at hand, to be dipped into at random for inspiration.

The second influence is Melvin Mencher, my faculty mentor at Columbia Journalism School (now emeritus). Those of us who sat in his courses and absorbed his passion for the craft and calling of journalism, and studied under his uncompromising eye, consider ourselves a privileged class. It’s not uncommon for me to ponder a blank screen and think, “How would Mel do it?”

Q: You break news about an astonishing variety of topics, often based on source documents that other people aren’t writing about. What are some of your favorite publicly available resources for generating story ideas?

A: I confess that I love Twitter. The main reason is that it can be personally curated—those in my timeline have shown an ability to push studies, papers, articles and more through links in an ever expanding net of sources and data. The Government Accountability Office (GAO) publishes a daily roster of its studies, which are almost always overlooked. I watch several specialized websites devoted to topics I cover most, such as healthcare and social insurance, such “The Incidental Economist” (healthcare law). And every pointer I pick up from any of these sources can lead to many more.

Q: Which writers have been most influential on your thinking about economics?

A: The economics faculty at Berkeley seems to harbor a surprisingly large number of sources in this category, possibly because they’re focused on the ground-level effects of our economic structure—that is, inequality. Brad DeLong has taken the postwar growth of inequality as one of his chief topics, and Emmanuel Saez and Gabriel Zucman have produced the statistical data that help us detect the trends. Dean Baker, founder of the  Center for Economic and Policy Research, is a fearless debunker of economic cant, as is Nobel Laureate Paul Romer (most concise observation: “A fact beats a theory every time.”)

Q: What do you see as the biggest opportunity and the biggest threat for organized labor in the next 5 years?

A: It’s possible that a growing awareness of the consequences of wealth inequality will revive interest in unionization in the private sector. But organized labor needs to make its case to the private-sector rank and file, and needs political help to do so.

The connection between the decline in union membership and the hollowing out of the middle class is inescapable, but the ability of organized labor to rally workers is hobbled by right-to-work laws and other instruments of economic slavery (masquerading as “freedom”). Democrats should be required to commit themselves, in the event of a Democratic administration or Democratic majorities in Congress, or both, to strengthening of collective bargaining rights, the revival of the NLRB’s pro-labor authority, and an outlawing of anti-labor legislation at the state level. In writing.

Q: What advice would you have for a young reporter who wants to cover the economy, but who is skeptical of the pro-business tone of most reporting on economics?

A: Any reporter covering economics needs always to keep in mind that the CEO or indeed the corporate suite is not the “business.” Business includes all stake-holders—employees, suppliers, customers, and the communities where a company operates. And reporters should be aware that the notion shareholders are a company’s “owners” is of very recent vintage, and in practical terms fundamentally untrue. Well before Milton Friedman declared that a management’s only responsibility is to the shareholders, business sage Peter Drucker pre-debunked the notion. A business’ primary responsibility, he wrote, is to the CUSTOMERS. If the business served them well, then the shareholders were entitled to residual profits, but not more.

With so much business coverage today coming from corporate press releases, every reporter needs to find alternative sources of information. These include short-sellers, who play an indispensable role in the marketplace, labor think tanks, consumer advocates. Finally, reporters should be aware that the cult of the free market, the fount of anti-regulation ideology, ignores the important fact that the corporation and the individual come to the “free market” with unequal resources; it’s government’s role to redress the imbalance.