MPU was the first national outlet to cover the strike. They published dispatches from the ground over a three-week period which collectively generated over 4 million views and spurred follow-on coverage by outlets such as the New York Times, the Washington Post, CNN, and NPR.

Frito-Lay workers in Topeka were striking against grueling working conditions including forced overtime that workers say destroys marriages and families. Workers are routinely forced to work 12-hour days, 7 days a week. Workers told MPU that they often go weeks without a day off.

The team also did an investigative story about Branden Ingram, a former Frito-Lay worker who was severely injured on the job after being electrocuted by faulty equipment. He accuses Frito-Lay of abandoning him when his injuries became disabling. Within the first 48 hours of its release, Brandon’s story became the 7th most widely-shared video on twitter, according to TrendsMap.

After a three-week strike, Frito’s Topeka plant struck an agreement to end the “suicide shifts” and forced 7-day workweeks. The contract approved by union members includes 4% raises over the next two years and gives the union a voice in staffing issues, among other concessions.

The Occupational Safety and Health Administration (OSHA) also ordered Frito-Lay to address some of the allegations first recounted by MPU, including employee deaths, dangerous fumes, and fire hazards.

Nico Pitney is senior director at More Perfect Union. He previously led the newsrooms at NowThis and HuffPost, and was managing editor of ThinkProgress and deputy research director at Center for American Progress.

Megan Herschlein joined More Perfect Union as a Media Producer after working at NowThis News for more than 4 years. She produced and edited the video exposing Frito-Lay’s horrifying mistreatment and abandonment of Brandon Ingram.

Jordan Zakarin is a media producer at More Perfect Union. He lives in Manhattan with his wife and swears he started his political newsletter before newsletters were “cool.” 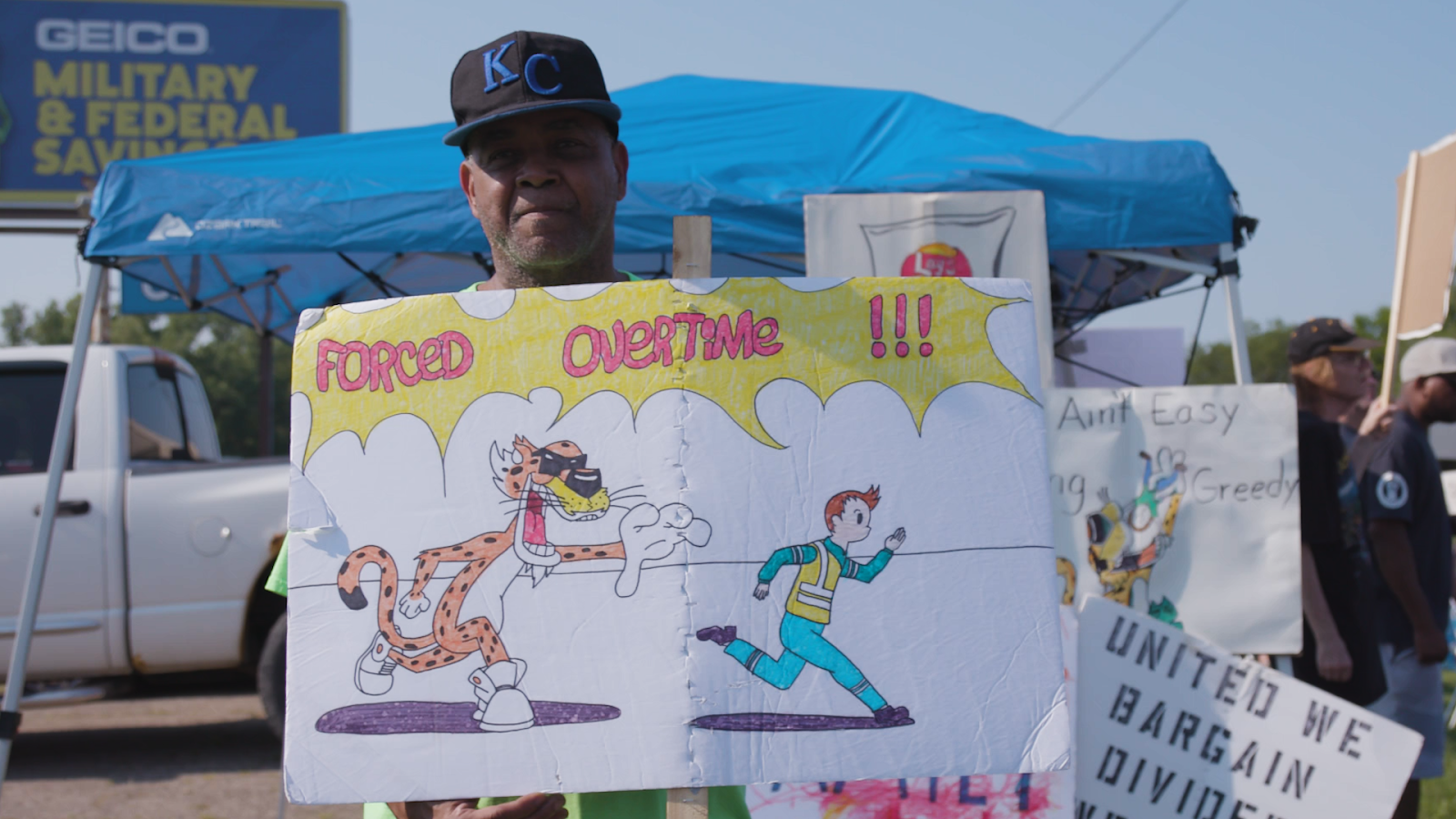 A striking Frito-Lay worker in Topeka, Kansas protested the company’s practice of forcing employees to work overtime, sometimes up to 84 hours per week.
More Perfect Union

Q: When did you start covering the labor dispute at the Frito-Lay plant in Topeka, and what drew you to this story?

We first got a tip from a rank-and-file Frito-Lay employee that workers at the Topeka factory had voted to authorize a strike if they couldn’t work out a new contract with the company. After reporting more about the conditions there, we sent a videographer to cover the launch of the strike and to capture workers sharing their stories. That initial coverage led to many more tips that guided our subsequent coverage.

Q: Describe the hours and working conditions that prompted the Topeka strike.

A: Workers in Topeka regularly reported working 7 days per week, sometimes for weeks on end. They were consistently assigned forced overtime with little or no warning. Workers were particularly upset about “suicide shifts” that allow just 8 hours of rest between consecutive 12-hour shifts — so someone who works from 7am to 7pm might be asked to clock back in at 3am. A number of workers told us they rarely got sufficient sleep, and workers who are parents described feeling disconnected with their own children.

Workers also described facilities that were unpleasant and unsafe. The facility has no air conditioning — during summer, with the large industrial cooking equipment, they said the warehouse could be over 100 degrees by the early morning, and during winters, they said they were asked to work without heating even in bitter cold.

Q: Why was the plant demanding such grueling work hours?

A: We believe Frito-Lay demands such long hours from workers to keep overall employment levels low. As a result, the facilities are severely understaffed — on purpose. One of the union’s demands was that Frito-Lay add 100 new workers to the plant’s staff, which is what they estimated was needed to keep up production while giving workers enough time off.

The company was interested in maximizing the productivity of the workers without taking into consideration their desire for more time with their families.

Q: Do other Frito-Lay plants treat their workers like this? Is this normal for the industry?

A: We asked Frito-Lay in writing to share how many of their roughly 40 U.S. facilities have similar policies regarding forced overtime, “suicide shifts,” employees working for weeks on end and/or working 70- or 80-hour weeks. They did not respond.

Our reporting suggests the way workers are treated in Topeka is similar to other Frito-Lay plants, but differences in state laws make certain locations more susceptible to mistreatment than others.

Frito’s pay and conditions were viewed favorably by workers as recently as two decades ago, but have fallen significantly in recent years, as other employers have begun to offer more generous employment terms. This is true in Topeka, which is filled with big factories and warehouses, though there aren’t enough jobs that people could just leave Frito-Lay.

In our video about Brandon Ingram’s mistreatment, we spotlighted another pernicious aspect of Frito-Lay’s treatment of its workers. Brandon suffered a severe electric shock on the job and was sent to a company-paid doctor for an evaluation, which kicked off a long saga of being denied treatment, any kind of workplace adjustment for his physical maladies, and then years of fighting with Frito-Lay’s insurer, Sedgwick, over medical bills, disability, and compensation as his injuries and their aftereffects grew worse and worse.

Q: What impact has your coverage had so far?

A: Since our initial report, Frito’s Topeka plant has struck an agreement to end the “suicide shifts” and forced 7-day workweeks.

Additionally, OSHA ordered Frito-Lay to address some of the allegations first detailed in our video report including employee deaths, dangerous fumes, and fire hazards.

Our coverage spurred interest in the story from a range of other media outlets and policy makers, including Congresswoman Cori Bush, who tweeted to former Frito-Lay worker Brandon Ingram: “Brandon, I’m your Congresswoman. My office is reaching out to you. You and your family deserve justice — you deserve peace. Know that our office stands with you. We are here to help.”

Our video also helped raise over $141,000 for a GoFundMe campaign run by Brandon’s wife, Melissa. She’ll use it to fund her small business, as she is now the only breadwinner for the family.

Q: Did you seek comment from Frito-Lay for these segments, what was their response?

A: We sent Frito-Lay a list of questions about their workplace policies. They did not respond.

After our video came out, Frito-Lay put out a statement that tried to muddle the facts about Brandon’s injury and what’s happened since. The family was quick to clarify each point. The company has taken no action.

Q: The strike has come to an end. Can you recap what gains the workers won, and what remains unresolved?

A: The contract approved by union members would guarantee one day off a week and includes 4% raises over the next two years. It would also end what workers call “suicide shifts,” two 12-hour shifts, with only eight hours off in between. It also includes “additional opportunities for the union to have input into staffing and overtime.” They are small but meaningful concessions and upcoming labor disputes with the company will certainly try to capitalize on them.

Q: Do you see this strike having repercussions beyond Frito-Lay Topeka?

A: Workers have more leverage now than at any point in the recent past. Wages are rising, labor unions are increasingly popular, employers are understood to be unconcerned with worker’s wellbeing, and many workers are reluctant to go back to work during the pandemic. This was the first strike at any U.S. Frito-Lay facility in more than 20 years, but courage tends to be contagious, and victories often lead to further action. Successful strikes like the Frito-Lay Topeka efforts demonstrate the potential for collective action and provide proof points to reluctant workers in future efforts.

Q: What did you learn from this project that you’ll carry forward to your next assignment?

A: Working people are eager to tell their stories — it’s just a matter of media organizations being willing to listen and amplify them. After we published the first video on Topeka, we began receiving a steady stream of emails and messages from people who have either suffered similar conditions at work or been hurt by Frito-Lay in particular.  One of those notes was from Melissa Ingram, who told us about how her husband was being denied help by the company.

Q: Was there something unexpected, moving, or funny that happened in the course of reporting this story?

A: Everyone was so invested in reporting on these stories in a way that doesn’t always happen. The strike began July 4th weekend, and late that first night, we were talking with our videographer in Topeka, trying to play middleman between him and workers as they began their picketing, determined to connect them and get the story. One of us spent half their long-scheduled (and long-delayed) honeymoon working on the story because it felt so urgent.

Q: What’s next for the workers at Frito-Lay Topeka?

Their contract runs for two years, at which point they’ll go back to the bargaining table. A lot of older and better-paid workers there understandably wanted to reach retirement, so if younger workers remain there, it could get more contentious with management.