Nina Martin of ProPublica and Amy Yurkanin of AL.com win the October Sidney Award for exposing Alabama’s attempt to twist an anti-meth-lab law to punish women for using drugs during pregnancy. The arrests of hundreds of new mothers combine the worst excesses of the War on Drugs with the anti-abortion movement’s “personhood” agenda.

Casey Shehi delivered a healthy baby boy in 2014, but she was charged with chemically endangering a child, a crime punishable by 10 years in prison. Her offense? Taking one of her boyfriend’s sleeping pills during the third trimester of a difficult pregnancy.

The 2006 Alabama law was intended to target parents who endanger their children with dangerous, home-based meth labs. Only months after the law was implemented, prosecutors decided that the law also covers fetuses and that the womb could be “an environment in which controlled substances are produced or distributed.”

The investigation revealed that at least 479 women have been arrested for “chemically endangering” their children in utero.

“This series exposes another cruel and counterproductive aspect of the War on Drugs,” said Sidney judge Lindsay Beyerstein. “What’s more, the Alabama Supreme Court took this opportunity to entrench the personhood agenda of anti-choice activists.”

Nina Martin is ProPublica’s first reporter covering gender and sexuality. She joined the staff in September 2013 after spending much of the last decade at San Francisco magazine.

Amy Yurkanin has been covering healthcare in Alabama for AL.com since December 2014. Prior to that, she worked for Nevada Public Radio in Las Vegas for two years, and at alternative weeklies in Las Vegas and North Carolina before that.

This series was a collaboration between ProPublica and AL.com. The first installment was also published by Mother Jones. 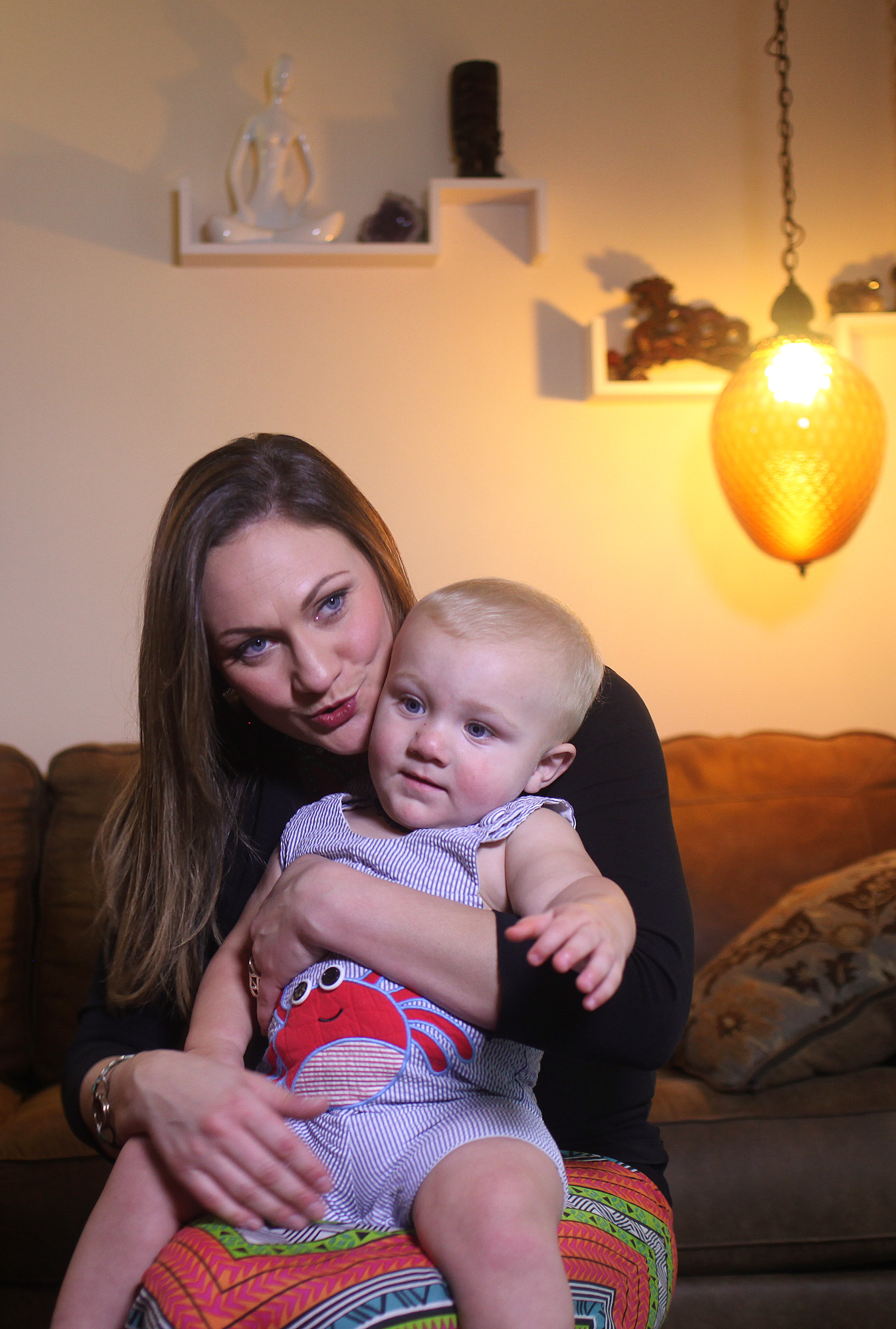 Casey Shehi with her son, James. Shehi was arrested and charged with chemical endangerment of a child in Alabama after she took Valium two times during her pregnancy. The charges were later dropped, but she has struggled to repair her reputation.
Justin Yurkanin for AL.com

Q: How did you learn that Alabama was imprisoning women who tested positive for non-prescribed drugs during pregnancy or after giving birth?

A: There have been scattered media reports for years alluding to Alabama’s practice of prosecuting women for drug use during pregnancy. By early last year, the nonprofit National Advocates for Pregnant Women had tracked more than 120 media reports announcing the arrest of pregnant women and new mothers going back to 2006. But no one knew how many women had been arrested or how those cases had played out. Even law enforcement officials had little or no idea what was happening in other parts of the state. (Nina Martin)

Q: What is the legal rationale for this practice?

A: In 2006, in the midst of the national panic about methamphetamine, Alabama lawmakers passed a statute targeting parents who exposed their children to dangerous home-based meth labs. Known as the “chemical endangerment of a child” law, the statute made it a felony to “knowingly, recklessly, or intentionally” expose a child to a controlled substance or drug paraphernalia. The penalties were much stiffer than for many other types of drug crimes: one to 10 years in prison if a child suffered no ill effects, 10 to 20 years if a child showed signs of exposure and 10 to 99 years if a child died. Just a few months after the law took effect, prosecutors concluded that “a child” could be a fetus and “an environment in which controlled substances are produced or distributed” could be a womb. In late 2006, they began charging mothers whose newborns tested positive for drugs — not just meth, but also cocaine, opioids and pot. (Nina Martin)

Q: Haven’t the courts ruled such unorthodox applications of chemical endangerment laws to be unconstitutional?

A: Prosecutors have been targeting drug-using mothers since the “crack baby” hysteria of the 1980s, often by repurposing statutes such as child abuse and drug trafficking laws meant for something else. But most high courts agreed that such efforts were terrible public policy, underhanded and unconstitutional, and only one state supreme court — South Carolina’s, in 1997 — condoned the criminalization approach. Fast forward 15 years: The Alabama Supreme Court is the most conservative in the country, and one justice in particular saw an opportunity to create new law enshrining the “personhood” rights of the fetus. In decisions in 2013 and 2014 that were as much about abortion as drugs, the Alabama court ruled that the meth-lab statute could indeed be used to prosecute expectant and new mothers from the earliest stages of pregnancy. (Nina Martin)

Q: ProPublica and AL.com filed multiple public records requests to learn how many women were affected by this law. Can you describe that process? Which agencies did you query and what kinds of materials did you receive?

A: We submitted a request to the Alabama Administrative Office of the Courts (AOC) for all cases of chemical endangerment across the state going back to 2006. (We also filed individual requests with district attorneys in each of the state’s 67 counties.) The AOC responded with a list of 500 cases, but we quickly determined that a number of cases already identified by Nina weren’t on the list. So we went back to the courts and they responded with 6,000 cases. We whittled the list down to 1,800 women. Then we had to go through each case to determine whether the defendant had been arrested for drug use during pregnancy. We pulled out all types of information, including what kinds of drugs the woman had been accused of using, the class of the felony, the woman’s race and whether she could afford to hire an attorney. If the court record didn’t specify whether it was a pregnancy case, we checked with prosecutors and defense attorneys. (Amy Yurkanin)

Q: What is “Just Busted” and what role did this unusual publication play in your investigation?

A: “Just Busted” is a weekly tabloid distributed throughout Alabama. It consists of mug shots organized by county and alleged crime (“Sex Offenders,” “Drunk Tank”), interspersed with ads for lawyers and bail bondsmen. The Tennessee-based publishers claim that their mission is to fight crime, but the paper’s real purpose is clearly to ridicule and shame, especially women — typically, three-quarters of the suspects arrested in Alabama are men, but three-quarters of those singled out on the cover are women. Several women told us that the common law enforcement practice of distributing mug shots to outlets such as “Just Busted” was humiliating and impossible to live down, even if the charges were eventually dismissed. The tabloid seemed to embody the callousness of the chemical endangerment law and, too often, the system that enforces it. (Nina Martin)

Q: How does the chemical endangerment law affect women who are receiving doctor-supervised methadone treatment?

A: The chemical endangerment law wasn’t written to address drug use during pregnancy, so it doesn’t have any exceptions for women who are using drugs under a doctor’s supervision. Therefore, technically women can be arrested for using legal methadone or any other prescription drug. Most prosecutors said they don’t do this, but we found a number of cases in court records of women who had apparently been arrested for using legally prescribed drugs, including methadone. Some methadone clinic administrators are also concerned the law could keep women from seeking treatment. Methadone maintenance is considered to be quite safe to both the fetus and the expectant mother and is the standard of care for treating opioid-dependent pregnant women. (Amy Yurkanin)

Q: In all, how many women have been charged under this law, and how many have been convicted and punished?

A: We found 479 cases of women in Alabama charged with chemical endangerment for drug use during pregnancy – but we know there are many more. Court records were incomplete, and not all of the attorneys responded to requests for information. We are still waiting for data about case dispositions to determine exactly how many women have been convicted for drug use during pregnancy and how many end up in prison. It’s clear that many cases get dropped when the evidence — especially legally questionable hospital-administered drug tests — is challenged. Many women take deals for drug court or pre-trial diversion. Women who face felony charges are often eager to make deals that will help them avoid jail and separation from their children. (Amy Yurkanin)