“The Hell of American Daycare”
The New Republic

Jonathan Cohn is a senior editor at the New Republic, where he writes about politics and policy with a particular focus on health care and social welfare. He is also the author of Sick: The Untold Story of America’s Health Care Crisis. His articles have appeared in other national publications including the Atlantic, the New York Times, and the American Prospect, where he worked previously as the executive editor. Jonathan has been a media fellow at the Kaiser Family Foundation, a senior fellow at Demos, and a Griffith Leadership Fellow at the University of Michigan. He is presently a member of the National Academy of Social Insurance and a contributing editor of the Milbank Quarterly. A graduate of Harvard, he now lives in Ann Arbor, Michigan, with his wife and two children. He shared a 2010 Hillman Prize for Blog Journalism with Ezra Klein for healthcare coverage. 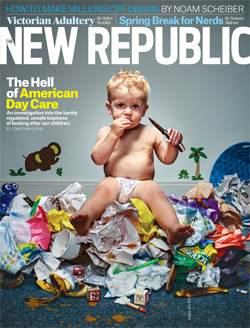 At the heart of Cohn’s story is Kenya Mire, a single mother from Houston whose 20-month-old daughter was killed in a fire at her day care in 2011, along with four other toddlers. Jessica Tata, the 22-year-old who ran the day care in her home, had a criminal record; on the morning of the fire, she left the kids alone with a burning stove while she went to Target.

In unraveling the harrowing story of how Tata was licensed to care for children, Cohn uncovers a national pattern of shockingly under-regulated institutions—relied upon by millions of poor and working-class families who cannot afford anything better for their kids. When he asks one Texas regulator how many day cares she would trust with her own child, she responds, “Twenty percent.”

For years, neuroscientists have known that the first few years of life affect the architecture of a child’s brain in ways that indelibly shape intellectual abilities and behavior. Early childhood is a period that has far-reaching implications across many spheres of American life, from education to health to the economy. Substandard day care is not only the largest barrier to full workplace equality for women, but is also a major public health crisis. Yet, our policies have still not embraced the research, resulting in an under-funded, under-regulated American day care system that can have tragic consequences for and long-lasting effects on our most vulnerable citizens.

Cohn sketches out some solutions, starting with plenty of caregivers, who ideally have some expertise in child development. He shows how France provides quality day care to all parents who want it, and how, closer to home, the U.S. military does the same for its families. The common element in these approaches is recognition that quality, affordable day care is an investment worth making.