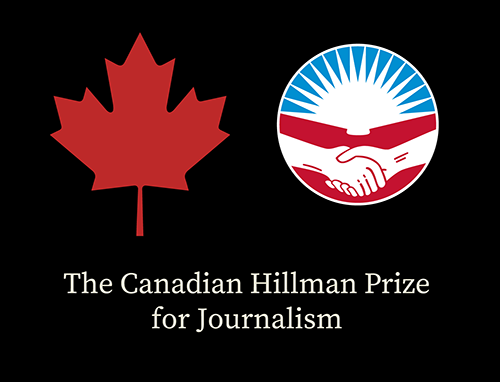 The call for entries for the 2023 Canadian Hillman Prize is now open.

The Canadian Hillman Prize honours excellence in journalism in service of the common good. The Hillman Prize seeks out investigative reporting that draws attention to social or economic injustice and leads to meaningful public policy change. We strive to recognize discernment of a significant news story, resourcefulness and courage in reporting, skill in relating the story and the impact of the coverage.

There is no fee to enter. There is no limit to the number of entries one publication or outlet may enter.

The 2023 Hillman Prize will be given to a reported story or series published or broadcast in 2022. Eligible entries include reporting in newspapers, magazines and online, as well as television, radio and podcasts, tablets and multimedia. Entries must have been published in Canada and/or have been widely accessible to a Canadian audience. Self-published work is not eligible.

The Canadian Hillman Prize winner(s) will be awarded a $5,000 honorarium and a certificate at our event to be held in-person in Toronto on Thursday March 30, 2023.

Since 1950, the Sidney Hillman Foundation has honored journalists, writers and public figures who pursue investigative journalism and public policy in service of the common good. Sidney Hillman was the founding president of the Amalgamated Clothing Workers of America, a predecessor union of Workers United, SEIU. Sidney Hillman, an architect of the New Deal, fought to build a vibrant union movement extending beyond the shop floor to all aspects of working people’s lives.