Pat Beall has been a reporter with the Palm Beach Post since 2004 and a member of the investigative team since 2010. She has written on issues including the role of Medicaid in financing illicit prescription drug rings, flawed voting equipment used in Florida and elsewhere and housing fraud, which triggered the arrest of 21 individuals. Prior to working at The Post, Ms. Beall was editor of the Orlando Business Journal, which won more than 300 journalism awards during her tenure, and a reporter for the Florida edition of the Wall Street Journal, where her responsibilities included in-depth and breaking news coverage. 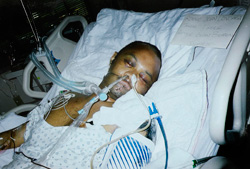 In 2012, a bitterly divided Florida Legislature locked horns over a sweeping privatization plan: Virtually all South Florida prisons would be handed over to a single for-profit prison company, the largest such effort in U.S. history.

The Palm Beach Post’s eight-month multipart investigation into private prisons linked a nationwide pattern of human rights abuses to corporate cost-cutting. Reporter Pat Beall compiled 13 years of national data, documenting a decade’s worth of squalor, violence and abuse that stemmed from a pattern of hiring too few guards or guards with little experience. Some guards came to the job with criminal histories; others committed crimes while still on the job. The Post’s comprehensive list of major prisoner abuse, published online as an interactive map, is the only one of its kind.

Florida’s state-run prisons retained the most dangerous and mentally-disturbed prisoners while handing over the least violent and cheapest offenders to private corporations. Florida state law ensures private prisons will be paid as if they’re 90 percent full, even if they’re not. The private companies routinely overbilled Florida for repairs and overcharged the state for tax reimbursements.

The series revealed that, unknown except to a handful of bureaucrats and the prison industry, taxpayer savings in Florida were calculated using a formula dependent on nonexistent “ghost costs” which made private prisons look cheaper.