$2.00 a Day: Living on Almost Nothing in America | Hillman Foundation
Skip to main content
Sign up to receive winner announcements, Calls for Entries, Sidney's Picks, invitations and more. 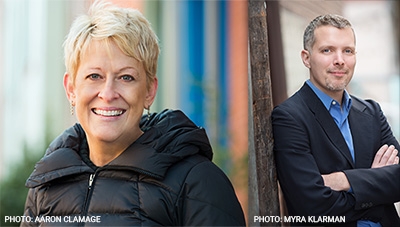 $2.00 a Day: Living on Almost Nothing in America 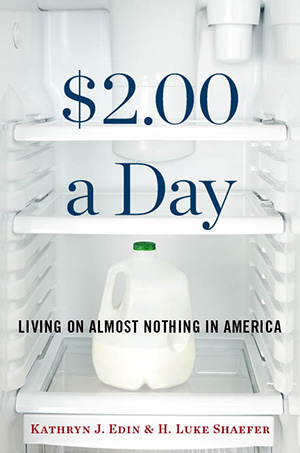 $2.00 a Day is a revelatory account of a kind of poverty in America so extreme, and so often hidden, most Americans don’t think it exists.

Jessica Compton’s family of four would have no income if she didn’t donate plasma twice a week at her local donation center in Tennessee. Modonna Harris and her teenage daughter Brianna, in Chicago, have gone for days with nothing to eat other than spoiled milk.

After two decades of groundbreaking research on American poverty, Kathryn Edin noticed something she hadn’t seen before — households surviving on virtually no cash income. Edin, whose deep examination of her subjects’ lives has “turned sociology upside down” (Mother Jones), teamed with Luke Shaefer, an expert on surveys of the incomes of the poor. The two made a surprising discovery: the number of American families living on $2.00 per person, per day, has skyrocketed to one and a half million American households, including about three million children.

But the fuller story remained to be told. Where do these families live? How did they get so desperately poor? What do they do to survive? In search of answers, Edin and Shaefer traveled across the country to speak with families living in this extreme poverty. They visited with families over the course of months and sometimes years, talking with them frequently, sharing meals, and observing their daily lives. Through the book’s many compelling profiles, moving and startling answers emerge: a low-wage labor market that increasingly fails to deliver a living wage, and a growing but hidden landscape of survival strategies among America’s extreme poor.

People and policy-makers alike have put welfare on the back burner. There are still so many who are denied the opportunity to make a living because of governmental and societal neglect.  In writing $2.00 a Day, Edin and Shaefer have become leading voices in this conversation. Senior White House officials have stated that their research has led directly to the inclusion of a new anti-poverty proposal called the Emergency Aid and Service Connection in the President’s Budget. If funded, this new $2 billion dollar Presidential initiative will provide funding to test new poverty-fighting methods, including faster short-term aid in addition to long-term programs. Shaefer and Edin have both testified before Congress, and have spoken before many of the nation’s largest charitable foundations, and at numerous centers for research on poverty. As Michael Harrington’s “The Other America” did 20 years ago, $2.00 a Day has sparked a conversation and promising changes of which Sidney Hillman would be proud.

Kathryn J. Edin is one of the nation’s leading poverty researchers, recognized for using both quantitative research and direct, in-depth observation to illuminate key mysteries about people living in poverty: “In a field of poverty experts who rarely meet the poor, Edin usefully defies convention” (New York Times). Her books include Promises I Can’t Keep: Why Poor Women Put Motherhood Before Marriage and Doing the Best I Can: Fatherhood in the Inner City. Edin is the Bloomberg Distinguished Professor of Sociology and Public Health at Johns Hopkins University.

H. Luke Shaefer is an associate professor at the University of Michigan School of Social Work and Gerald R. Ford School of Public Policy, and a research affiliate at the National Poverty Center.