The New York Times and the Marshall Project 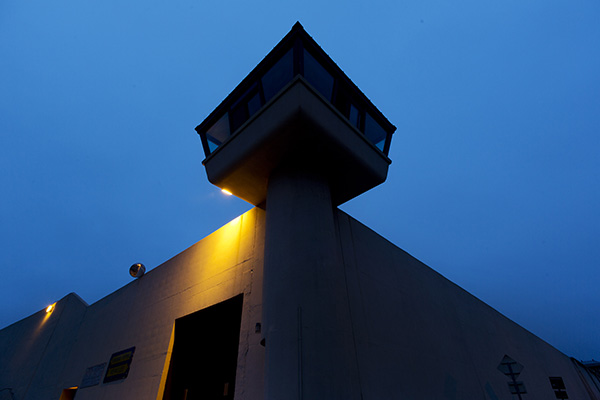 When two convicted murderers broke out of a maximum-security state prison in a remote New York town near the Canadian border last year, the ensuing manhunt riveted millions.

But the more compelling human drama unfolded out of public view, behind prison walls: there, inmates were repeatedly brutalized by guards desperate to learn about the escaped men. While national and international media focused on the weeks-long search for the escapees, New York Times reporters Michael Winerip and Michael Schwirtz, who had spent the previous year exposing abuses at New York City’s Rikers Island jail complex, learned the disturbing details of how guards were conducting the interrogations. One inmate was handcuffed and dragged into a broom closet, where he was repeatedly punched, and had a plastic bag placed over his head. There were threats of water boarding. Another inmate passed out after being choked with a plastic bag. Dozens of prisoners were thrown into solitary confinement on suspicions that proved baseless. In the end, the only ones implicated in connection with the escape were guards and their supervisors.

The guard’s brutal response to the escape came months after an equally disturbing episode of inmate abuse in a New York state prison was detailed in the Times’ pages by Tom Robbins of the Marshall Project, a year-old nonprofit news organization dedicated to criminal justice issues. In that case, three guards at Attica prison were criminally charged – for the first time in state history — for pummeling an inmate so badly surgery was required to repair his broken bones. In his story, Robbins revealed that the beating was only one in a long series of otherwise unpunished incidents of extreme brutality by guards that occurred at Attica, where reminders of the deadly 1971 riot there still linger.

The reporters and their news organizations teamed up in a bid to document a broken corrections system that has largely escaped public attention. By pooling their resources, the two organizations uncovered vicious beatings — three resulting in highly suspicious deaths — at prisons, most in small towns, with little or no scrutiny. They also revealed a phenomenon nearly as troubling as the violence itself — the inability of prison administrators to discipline its own workforce.  Prison guards, protected by a powerful union with strong political clout in Albany, are rarely fired, the articles showed.

Change, however, may be on the way. Since the Times and Marshall Project stories began running, state officials have begun efforts at reform. Last month, the reporters described how state prison administrators are pursuing rogue officers prone to violence with a newly emboldened internal investigation unit staffed by law enforcement professionals brought in from outside the agency.

In 2015, the reporting of The New York Times and the Marshall Project began forcing New York’s prisons to adhere to a bedrock principle of American justice: that prisons are places where criminals are sent as punishment, not to be punished.

Michael Winerip is an investigative reporter for the Metro desk at The New York Times. For the last two years he has worked with a fellow staffer, Michael Schwirtz, on a series exposing brutality at Rikers Island and the state prisons. During his more than three decades at the paper, he has held most every job in the newsroom. In 2012, he created the Booming blog, an online feature focusing on the post-World War II baby boom generation. Before that, he was the national education columnist for The Times, a role he had previously held twice before, from 2002 to 2006 and in the early 1990s. He has written several reported columns for the paper, including Generation B (also about baby boomers) and Parenting (he’s the father of four), and for six years, starting in the mid-1980s, Our Towns, chronicling life in the New York suburbs. He has also served as the national education writer, a national political correspondent, deputy metro editor and a staff writer for The New York Times Magazine.

Mr. Winerip was a reporter and editor for the paper’s extensive series “How Race Is Lived in America,” published in 2000. In addition to being the story editor for the series, he spent a year with a New York City police plainclothes narcotics unit in Harlem, writing about racial profiling and community relations. The series won the 2001 Pulitzer Prize for National Reporting. The year before, his magazine article “Bedlam on the Streets,” an investigation into the failure of the mental health system in a notorious subway murder case, was a finalist for the Pulitzer Prize in Explanatory Reporting. As a result of that exposé, the state of New York appropriated an extra $215 million to improve mental health care.

Before joining The Times, Mr. Winerip worked at The Miami Herald from 1978 to 1982. He was a reporter for The Rochester Times-Union from 1974 to 1976 and for The Louisville Courier-Journal from 1976 to 1977, covering Appalachia out of a one-man bureau in Hazard, Ky. His newspaper work has appeared in a number of collections of literary journalism, including The Art of Fact, Great Lives of the Twentieth Century, Tales from The Times and How Race Is Lived in America. In 1980 and 2003, he won national awards for his education reporting, and in 1982, the Florida Newspaper Editors Association named him the state’s outstanding reporter. In 2015, Mr. Winerip and Mr. Schwirtz won the Polk Award for their series about Rikers Island brutality.

Mr. Winerip is the author of 9 Highland Road: Sane Living for the Mentally Ill, a nonfiction book about a successful community mental health program, published in 1994. The book was a finalist for the Pen Literary Award in Nonfiction and the website Policy.com named it one of the 50 most important public policy books of all time. He has written a three-book series of children’s novels about the world’s greatest middle school newspaper: Adam Canfield of the Slash (2005), Adam Canfield Watch Your Back (2007) and Adam Canfield The Last Reporter (2009).

Tom Robbins is a freelance reporter currently working with the Marshall Project on a series of articles about prison conditions in New York State. In addition to his work with the Marshall Project, he has worked since 2011 at the City University of New York Graduate School of Journalism, where he teaches reporting and serves as an adviser to students and faculty on investigative projects.

Mr. Robbins has been a reporter based in New York City for more than 30 years. From 2000 to 2011, he worked at The Village Voice as a columnist and reporter covering politics, crime and workplace issues. At The Voice, his columns received the top award from the Association of Alternative Newsmedia in 2009 and 2010. In 2008, the New York Press Club and the AAN honored articles he wrote that resulted in the dismissal of murder charges against an F.B.I. agent accused of conspiring with his Mafia informant. In 2002, the Investigative Reporters and Editors gave its top certificate for local circulation weeklies to a series of articles he wrote that resulted in the conviction of three City Hall officials on corruption charges.

Before The Voice, he worked at The New York Daily News from 1988 to 2000 as a reporter and columnist. The Associated Press, the Deadline Club and others cited investigative team projects of which he was a part, including a series on the city’s asthma epidemic. Prior to The News, he was part of the original staff at The New York Observer in 1987 where he was a reporter and initiated a political column, “Wise Guys.”

Mr. Robbins did an earlier stint at The Voice from 1985 to 1987 and he was editor of City Limits Magazine, a monthly journal focused on housing and development in New York City’s low-income neighborhoods, from 1980 to 1985. His first journalism jobs were with local newsweeklies in Brooklyn, including the North Brooklyn News from 1978-80.

Born in New York City, he graduated from the Putney School in 1967. Prior to becoming a reporter, he worked from 1972 to 1977 as a community organizer on the Lower East Side and as a cabdriver for a taxi fleet in Greenwich Village on which the TV show “Taxi” was based.