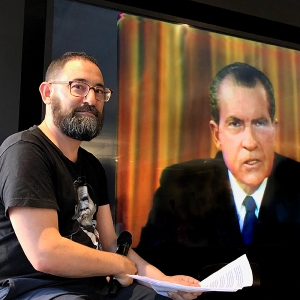 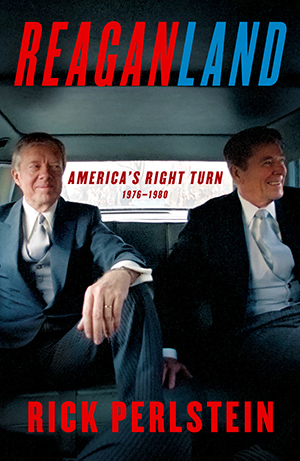 Over two decades (and more than three thousand pages), Perlstein had previously published three definitive works about the emerging dominance of conservatism in American politics: Before the Storm: Barry Goldwater and the Unmaking of American Consensus (2002); Nixonland: The Rise of a President and the Fracturing of America (2008); and The Invisible Bridge: The Fall of Nixon and the Rise of Reagan (2014). In 2020, with the saga’s final installment, REAGANLAND—covering the years from Jimmy Carter’s election to his defeat at the hands of Ronald Reagan—he has delivered his most stunning literary and historical achievement yet. Perlstein shows how much the nation changed over those years—and just as importantly, how those changes produced the world we live in now.

In late 1976, Ronald Reagan was dismissed as a man without a political future: defeated in his nomination bid against a sitting president of his own party, blamed for President Gerald Ford’s defeat, too old to make another run. His comeback was fueled by an extraordinary confluence: fundamentalist preachers and former segregationists reinventing themselves as militant crusaders against gay rights and feminism; business executives uniting against regulation in an era of economic decline; a cadre of secretive “New Right” organizers deploying state-of-the-art technology, bending political norms to the breaking point—and Reagan’s own unbending optimism, his ability to convey unshakable confidence in America as the world’s “shining city on a hill.”

Perlstein also describes a simultaneous civil war within the Democratic party. When President Jimmy Carter called Americans to a new ethic of austerity, Senator Ted Kennedy reacted with horror, challenging him for reelection. Carter’s Oval Office tenure was further imperiled by the Iranian hostage crisis, the Soviet invasion of Afghanistan, near-catastrophe at a Pennsylvania nuclear plant, aviation accidents, serial killers on the loose, and endless gas lines. Perlstein also chronicles Carter’s Federal Reserve chair’s bid to combat stagflation with the infamous “Volker Shock,” a move that shattered the central banking consensus that all classes should share in the nation’s prosperity and privileged the interests of capital over those of labor. The stratospheric interest rates Volcker imposed had catastrophic consequences in the industrial Midwest and decimated American manufacturing.

Backed by a reenergized conservative Republican base, Reagan defeated Carter and ran the country for the next eight years, an era that is crucial to understanding our own.

In his first inaugural address in 1981, Reagan said: “government is not the solution to our problem; government is the problem,” and we are still dealing with the repercussions today. That same year, after campaigning as a union man (as an actor, he was a member of SAG-AFTRA), Reagan famously fired the striking air traffic controllers, crushing their union and ushering in the era of war on unions that only recently seems to be turning the tide.

Deregulation, the power of the NRA, the zealotry of anti-abortion activists, the rise of white supremacy, tax cuts for the wealthy, precarious relationships with Russia, China and Iran—decades later, we continue to deal with these issues. As Perlstein makes clear, this is not by coincidence or chance. He traces the conservative strategy to gain power and shows that they are simply sticking with what worked, right down to the campaign slogan “MAKE AMERICA GREAT AGAIN,” which was devised by a Madison Avenue ad agency for Reagan’s presidential campaign.

REAGANLAND is essential reading for anyone hoping to understand the era we lived through and how American politics arrived where it is today.

Rick Perlstein is the author of the New York Times bestseller The Invisible Bridge: The Fall of Nixon and the Rise of Reagan; Nixonland: The Rise of a President and the Fracturing of America, a New York Times bestseller picked as one of the best nonfiction books of 2007 by over a dozen publications; and Before the Storm: Barry Goldwater and the Unmaking of the American Consensus, which won the 2001 Los Angeles Times Book Award for history and appeared on the best books of the year lists of The New York Times, The Washington Post, and the Chicago Tribune. His essays and book reviews have been published in The New Yorker, The New York Times, The Washington Post, The Nation, The Village Voice, and Slate, among others. A contributing editor and board member of In These Times magazine, he lives in Chicago.